EMALS: How U.S. Navy Aircraft Carriers Will Dominate the Future? 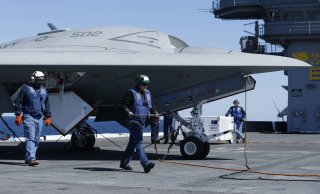 Navy Ford-class aircraft carriers will be able to launch a much greater number of drones in different sizes and configurations from the deck of the ship. The new Electromagnetic Aircraft Launch System (EMALS) will tailor a ship’s thrust to launch a much wider range of air vehicles than what is possible with a traditional steam catapult.

This impacts the tactical equation as aircraft carriers will operate with an ability to launch small, medium and large drones for reconnaissance, refueling or even attack missions. Also, it aligns with the Navy’s conceptual thinking about the future of the Carrier Air Wing.

This operational flexibility is particularly useful because the amount of thrust needed to launch an aircraft depends upon a range of interwoven factors to include size, shape and weight of the aircraft, wind speed on the carrier deck and the speed of the aircraft carrier in the water. EMALS is engineered to support current and future air-wing configurations; it is designed to accommodate a future air wing that requires higher energy launches and a much higher sortie rate.

The USS Ford is able to generate 13,800 volts of electrical power, more than three times the 4,160 volts that a Nimitz-class carrier generates. Also, EMALS is engineered to work in tandem with the USS Ford’s new Advanced Arresting Gear (AAG). Unlike the existing hydraulic system used on current aircraft carriers, AAG is a mechanical-electrical system with a cable that spins a water twister. Similar to EMALS, the AAG is designed to reduce stress on the airframe during the landing process. Onboard the USS Ford, the EMALS and AAG systems recently achieved “8,157 successful aircraft launches and recoveries during the ship’s Independent Steaming Events,” a GA-EMS company statement said. EMALS and AAG have now completed initial carrier qualifications.

The maturation of EMALS has been a multi-year developmental process, as it represents the advent of previously unprecedented technology; many tests on land and at sea were performed before the system fully emerged on the USS Ford. Prior to being integrated onto an actual carrier and reaching its current operational status,  ground-based EMALS catapult tests launched EA-18G Growlers, F/A-18 Super Hornets, C-2 Greyhound planes, E2D Advanced Hawkeyes and even an F-35 jet—all in preparation for carrier service