Emergency: This F-22 Had to Make an Unexpected Landing in Hawaii 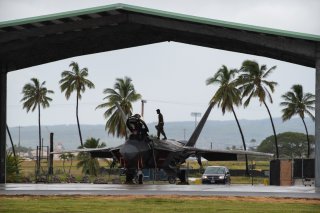 The Drive recently shared the details of what happened when one of the 199th Fighter Squadron's F-22A Raptors landed after an emergency.

The incident took place on August 11, 2021, when the F-22 suffered an in-flight emergency (IFE), and had to return to Joint Base Pearl Harbor-Hickam.

The Instagram account HNL Ramper, which is operated by a photographer, captured a video of the landing.

“Today we had an #f22 come in on an Emergency and he required the use of the barrier cable and thankfully everything worked out flawlessly and the plane stopped on a dime safely,” the Instagram account said. "All the hard working guys and gals from #hickamafb did a great job to get the plane secured and off the RWY ASAP so the rest of the group could get the arresting cable back in place and set up for the next time it's needed. All in all the RWY was closed for maybe 1.5 hours max.”

The Drive also speculated about what may have caused the incident.

“Barrier engagements can come as a result of a long list of IFEs, including hydraulic or undercarriage issues, or even a malfunctioning environmental control system. They can even be used for short field operations, at least in some cases,” the site said. “Regardless, it's great that everything worked out and one of the unit's precious Raptors and its even more precious pilot made it down safe.”

Earlier this month, we looked at the question of why the U.S. built so few F-22 Raptors after the program began in 2005.

“The F-22 wasn’t completely stricken off the roster, but the procurement program was gutted to such a degree that the Air Force’s remaining F-22s are simply incapable of fully addressing America’s high-end airpower needs. At a time of growing great-power competition and intensifying regional threats, that may prove to be a costly mistake," national security reporter for the National Interest Mark Episkopos said.

“In its earliest days, the program was met with consistent political resistance. The complaints ran along two, interrelated fronts: onerous costs and limited usability concerns. Part of the problem is that there is no universally agreed-upon way to calculate the F-22’s price. The most popular metric is the fighter’s “flyaway cost”—namely, the production cost of a single additional model,” Episkopos wrote.

“Those estimates have ranged anywhere from $110 to $180 million during the 2000s. For a sense of scale, the Pentagon and Lockheed Martin have recently negotiated a flyaway cost of $80 million per unit for the F-35 fifth-generation fighter. The F-22’s critics prefer to cite the total per-aircraft cost, which encompasses both research and development (R&D) as well as production outlays; that tally comes out to a less flattering $350-380 million.”