The End of an Era: U.S. Navy to Retire the USS Nimitz Aircraft Carrier 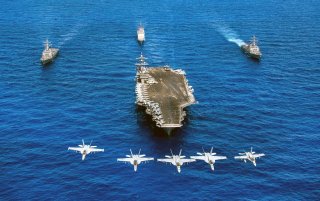 The United States Navy will retire the USS Nimitz, a supercarrier and the lead ship of her class. The information came to light via a report from Jane’s.

U.S. Navy officials explained that “USS Nimitz (CVN 68) is planned to be removed from the battle force in fiscal year (FY) 2025, when the ship's Terminal Off-load Program begins, with inactivation scheduled to begin in 2027.”

The carrier has been in service since the mid-1970s and, upon decommissioning, will be one of the oldest carriers in U.S. Navy service.

“Upon decommissioning, Nimitz will have served its country for 50 years spanning from Operation ‘Earnest Will' in the Arabian Gulf to its 11-month deployment in the Indo-Pacific and Middle East regions in 2020–2021,” U.S. Navy officials explained.

“As the navy continues to accept Gerald R Ford-class carriers, we will remain a ready, agile force to compete and win around the world at any time.”

Compared to the older Nimitz-class ships, the Ford-class ships offer several operational advantages. Outfitted with a pair of newer, higher-output reactors, the carriers generate more electricity than the Nimitz-class is capable of.

And the Fords need more electricity—their electromagnetic aircraft launch system, though offering the ships a higher sortie rate, consumes a greater amount of electricity than the Nimitz-class steam-powered catapults.

Extra electricity generation will also allow the Ford-class to incorporate some of the U.S. Navy’s most cutting-edge weapon systems in the future—first and foremost, laser weapon systems. Though laser weapon technology is highly energy-intensive, nuclear reactors give lasers a virtually infinite magazine depth and a very low cost per shot. And though initially designed as a defensive weapon, lasers could, in theory, be employed on carriers as an offensive weapon.

The Navy anticipates the USS Gerald R. Ford’s first operational deployment in late 2022, with the second of the class, the USS John F. Kennedy, having already been launched.

The shipyard building the carriers, Huntington Ingalls Industries' Newport News Shipbuilding, has two other Ford-class carriers in production, the USS Enterprise, and the USS Doris Miller.