End the Ukraine War Before It Ends in Disaster 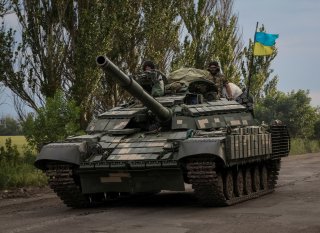 How will the war in Ukraine end? Senior Biden administration officials privately admit they believe neither Ukraine nor Russia is capable of winning the war outright. At the same time, the Biden administration has ruled out pushing Ukraine to negotiate an end to the conflict, despite growing concerns on both sides of the aisle over the economic and potential security consequences should the United States get dragged into direct hostilities with Russia. Instead, Washington continues to funnel billions of dollars’ worth of weapons, equipment, and aid to Ukraine despite not believing Kyiv can win the war—not exactly a sound geopolitical strategy, let alone good stewardship of American taxpayer money.

At the moment, negotiations seem to be anathema to both the Ukrainian and Russian sides. However, all wars must eventually end. If U.S. president Joe Biden is not interested in using any American leverage to get Ukraine and Russia to come to the negotiating table—such as lifting sanctions on Moscow or communicating to Kyiv that its support is conditional—it seems the bloodshed will continue for the foreseeable future. What, then, are some plausible scenarios for how the war could develop?

Following impressive battlefield victories over the late summer, Ukraine could continue to liberate more of its territory. Ukrainian president Volodymyr Zelensky contends that Ukraine will push Russia entirely out of Ukraine, including Crimea, which Russia annexed in 2014. If this scenario materializes, Moscow may utilize its final trump card: tactical nuclear weapons. Russian president Vladimir Putin has set the stage for such a scenario by stating that annexed territory should now be considered part of Russia proper and will be defended with all available means. With his political, if not actual, existence on the line, Putin could order nuclear use to “escalate to de-escalate” in an attempt to force Ukraine to the negotiating table. While it is understandable that Ukraine would want to capitalize on its recent victories and recover more of its territory, the utilization of nuclear weapons in Ukraine would be catastrophic and could lead to the United States or NATO getting directly involved in the conflict.

The opposite scenario must also be contemplated. Russia, despite its countless failings so far, may find a way to alleviate its poor showing and begin to inflict conventional defeats on the Ukrainian armed forces and conquer more Ukrainian territory. It would not be the first time in Russia’s history that it turned an apparent defeat into victory—see Russia’s looming military collapse following Nazi Germany’s invasion in 1941, followed by the Red Army’s eventual triumph in 1945. Should Russia manage to consolidate its forces and advance further into Ukraine, it would cause more needless death and destruction and degrade Kyiv’s negotiating position should it then seek a diplomatic settlement to the war.

A third potential scenario is that of a protracted stalemate. The current Ukrainian and Russian front lines may stabilize with little to no territorial exchange occurring on either side. While a stalemate would frustrate Ukrainian efforts to push Russia out of the entirety of its territory, it may eventually lead Kyiv and Moscow to conclude that diplomacy is the best path forward. Ukraine must also be cognizant that U.S. and European support may wane should the war grind on. While Ukraine is free to carry out its war effort as it sees fit, it is currently heavily dependent on Western aid and support. Should that support decrease, Ukraine’s bargaining position would once again be weaker than if it pushed for a settlement while experiencing battlefield success.

A final scenario is that internal Russian discontent leads to a political coup in Moscow. The hope would be that a new regime in the Kremlin would seek to cut its losses and end the war. Given Putin’s grip on the Russian establishment, this scenario seems unlikely but should not be entirely dismissed. However, Putin’s removal may have significant unintended consequences, leading to dangerous instability in the world’s largest nuclear power. It is also not clear that his successor would seek an end to the war in Ukraine, nor seek friendlier relations with the West. Indeed, many Russian elites have expressed concern that Putin has not been aggressive enough in Ukraine.

Former Israeli prime minister Yitzhak Rabin once aptly stated, “You don't make peace with friends. You make it with very unsavory enemies." Indeed, history suggests that most interstate wars end through some form of diplomacy, with total victory for one side a rarity. Moreover, the existence of nuclear weapons adds extreme risk. By avoiding efforts to push for a ceasefire and a lasting settlement, the United States is prolonging a conflict where even the most optimistic scenario for Ukraine—recovering all its territory—may still lead to unthinkable consequences should Russia use nuclear weapons. While the United States is rightfully sympathetic to the Ukrainian cause, the reality is that Ukraine’s fate does not fundamentally affect U.S. security. Biden’s recent comment that the war in Ukraine has raised the risk of nuclear armageddon to the highest point since the Cuban Missile Crisis should have set off alarm bells in Washington and prompted reflection on current U.S. policy. Instead, Washington seems content to continue business as usual. Given the stakes, the American people deserve better from their elected officials.

Sascha Glaeser is a Research Associate at Defense Priorities. He focuses on U.S. grand strategy, international security, and transatlantic relations.