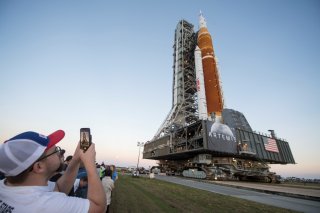 NASA was set to launch the Artemis I mission from Kennedy Space Center in Florida on Monday morning, but engine problems have postponed the attempt. Using what’s described by CNBC as “the most powerful rocket ever assembled,” the unmanned mission will eventually take a journey around the moon.

“Artemis I, formerly Exploration Mission-1, will be the first integrated test of NASA’s deep space exploration systems: the Orion spacecraft, Space Launch System (SLS) rocket, and the ground systems at Kennedy Space Center in Cape Canaveral, Florida,” NASA says on its website. “The first in a series of increasingly complex missions, Artemis I will be an uncrewed flight test that will provide a foundation for human deep space exploration, and demonstrate our commitment and capability to extend human existence to the Moon and beyond.”

The launch, CNN reports, was set to take place between 8:33 a.m. ET and 10:33 a.m. ET on Monday. However, it has now been rescheduled to Friday, which should give engineers ample time to address any problems discovered with Artemis’ engines.

“This is a mission that truly will do what hasn’t been done and learn what isn’t known,” Mike Sarafin, Artemis I mission manager at NASA Headquarters in Washington, said, per the NASA site. “It will blaze a trail that people will follow on the next Orion flight, pushing the edges of the envelope to prepare for that mission.”

The agency also discussed what will happen next on the Artemis missions.

“Future exploration missions with crew aboard Orion will assemble and dock with a Gateway. NASA and its partners will use the gateway for deep-space operations including missions to and on the Moon with decreasing reliance on the Earth. Using lunar orbit, we will gain the experience necessary to extend human exploration farther into the solar system than ever before.”

SpaceX also has a part to play as well. With the company’s Starship holding a contract in hand to “develop a moon-specific version of the rocket to serve as the crew lunar lander for the Artemis III mission,” CNBC said.

Not everyone is thrilled with the planned launch. The Economist wrote in an editorial that the rocket is “a colossal waste of money,” and the sort of thing that should be left to private industry.

“The Space Launch System (sls) is the first step in the agency’s Artemis programme, which aims to take humans back to the Moon and, eventually, to Mars,” the editorial says. “It is also a colossal boondoggle. The conception and execution of the project has been a near-perfect example of pork-barrel politics. The result is a rocket that privately built models will probably outclass soon after its maiden launch. Don’t blame the scientists and engineers at NASA for the debacle, though. The fault lies, once again, with Congress.”