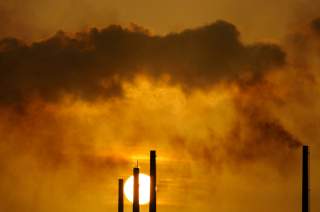 Air pollution, especially one type that is worsening with global warming, can accelerate lung disease as quickly as smoking a pack of cigarettes a day, new research released Tuesday shows.

The study published on August 13 in the journal JAMA by researchers at the University of Washington, Columbia University, and the University at Buffalo, doubles down on the link between air pollutants and lung disease. It also emphasizes the connection between the lung ailment emphysema and pollution from ground-level ozone, the main ingredient in smog (not to be confused with the ozone layer).

But Tuesday’s study, funded by the Environmental Protection Agency (EPA), showed an increase in emphysema after exposure to pollutants like PM2.5 — fine particulate matter already linked to a staggering number of deaths — as well as black carbon.

Most notable was the impact of ozone. While other air pollutants are largely decreasing nationwide, ozone is increasing — with severe public health ramifications.

For years, scientists have linked worsening ozone pollution to climate change. Smog is created when pollutants react with each other in sunlight; warmer temperatures can cause air to stagnate, forcing people to breathe in the pollution. So, as ozone becomes more prevalent with climate change, its impact on lungs will become more widespread.

The 18-year study tracked more than 7,000 people of various ethnicities and races between 2000 and 2018 across six major metropolitan areas. Researchers found that if an individual’s exposure to ozone pollution increased slightly (by 3 parts per billion) that was “significantly associated” with an increased risk of emphysema over a decade — the equivalent of smoking one pack of cigarettes every day for 29 years.

The World Health Organization recommends people not exceed exposure to ozone levels of 60 ppb over eight hours, and no more than 20 days in one year. The EPA’s 1971 recommendations put that level at 80 ppb.

The urban areas included in the study are Chicago, Illinois; Winston-Salem, North Carolina; Baltimore, Maryland; Los Angeles, California; St. Paul, Minnesota; and New York, New York. The new study also found that ozone is increasing in these cities, a trend scientists attribute to climate change. Annual ozone averages in the places studied were between 10 and 25 ppb.

“These findings matter since ground-level ozone levels are rising, and the amount of emphysema on CT scans predicts hospitalization from and deaths due to chronic lung disease,” said Dr. R. Graham Barr, a Columbia University professor and a senior author of the paper.

While the EPA funded the study, the researchers’ findings are at odds with the government’s policies. President Donald Trump’s administration is weakening clean air regulations and seeking to relax air quality rules imposed on coal-fired power plants, for example, in addition to targeting vehicle emissions standards in states like California. Data shows that those standards have helped improve air quality.

Trump and other top-level officials have also taken a skeptical stance on climate science, downplaying and questioning the threat of global warming. The study in JAMA highlights that both weakening air quality rules and ignoring climate change could have real long-term health consequences.

In a statement, co-author Dr. R. Graham Barr cautioned that worsening ozone pollution could have dire health implications as the world warms.

“As temperatures rise with climate change, ground-level ozone will continue to increase unless steps are taken to reduce this pollutant,” Barr said. “But it’s not clear what level of the air pollutants, if any, is safe for human health.”

This article originally appeared on ThinkProgress on August 13, 2019.