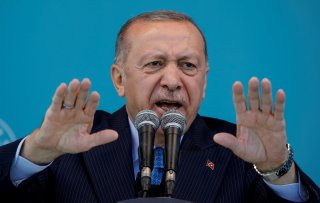 Turkish president Recep Tayyip Erdogan has launched an investigation into the Turkish lira’s rapid loss of value in November, suggesting that it could have been the result of intentional currency manipulation, according to a Sunday report by the Turkish state-run Anadolu news agency.

The report announced that Erdogan had assigned his “State Supervisory Council” auditors to investigate large purchases in lira of foreign currencies within Turkey in an attempt to determine if those purchases were part of a suspicious pattern. The council has subpoena power and can demand information from relevant organizations; it ultimately reports to the president’s office.

The Turkish lira has lost nearly half of its value since the start of the year. It reached its lowest point earlier in the week, trading for roughly 13.5 per U.S. dollar after Erdogan indicated that the country would continue to cut interest rates in spite of extremely high inflation. In accordance with Erdogan’s wishes, Turkey’s central bank cut interest rates by roughly 4 percent in November, a move that was widely held to be responsible for the decline.

To rein in inflation, most economists typically recommend raising interest rates, making it more difficult for commercial actors to borrow money and slowing the economy down. Erdogan has advocated an alternative theory of economics, positing that high interest rates cause inflation and attempting to cut them as a solution. In spite of mounting criticism, he continued to defend his approach this week, arguing that the country was engaged in an “economic war of independence.”

“We are seeing the games that are being played over the exchange rate, interest rates and price rises by those who want to push our country out of the equation,” Erdogan claimed without providing additional details on who was responsible for Turkey’s sidelining.

Erdogan’s economic management has drawn criticism from the country’s political opposition, including from former Erdogan ally Ahmet Davutoglu, who served as Erdogan’s prime minister from 2014 to 2016 before creating his own political movement, the “Future Party.”

“Do not continue on this wrongful path,” Davutoglu cautioned Erdogan last week, arguing that his policies were “harming the country and the economy.”

Kemal Kilicdaroglu, an economist and the leader of Turkey’s opposition, aimed his criticism at the central bank’s subservience to Erdogan. He argued that it no longer had the ability to set its own economic policy.

“The institution which is responsible for price stability cannot bring about price stability. It has become a spectator. Its powers have been taken away,” he said.