Erdogan Lays Out Conditions for Sweden and Finland’s NATO Bids 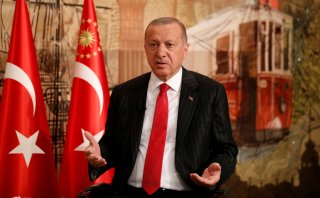 Turkish president Recep Tayyip Erdogan reiterated on Saturday that his government would oppose the accession of Sweden and Finland to NATO unless its concerns regarding the two countries’ relationship with Kurdish militants in northern Syria and southern Turkey were addressed.

“Unless Sweden and Finland clearly show that they will stand in solidarity with Turkey on fundamental issues, especially in the fight against terrorism, we will not approach these countries’ NATO membership positively,” Erdogan said during a phone call with NATO Secretary General Jens Stoltenberg, according to his office’s readout of the meeting. The president’s concerns over terrorism refer to suspicion among Turkish officials that Stockholm and Helsinki support the Workers’ Party of Kurdistan, or PKK, a transnational left-wing Kurdish political party and militia that has conducted several terrorist attacks within Turkey and has been classified as a terrorist group by the United States and European Union.

Turkey has also accused the two countries of supporting and providing asylum to supporters of Pennsylvania-based Turkish cleric Fethullah Gulen, who Ankara claims helped to mastermind a 2016 coup attempt aimed at ousting Erdogan.

Stoltenberg claimed on Twitter that the two leaders had spoken about the importance of NATO’s “open door,” the policy that any nation can join the alliance with its existing members’ consent. At the same time, he agreed to look into Turkey’s objections to the move, claiming that “the security concerns of all [NATO] Allies must be taken into account and talks need to continue to find a solution.”

On Saturday, Erdogan held back-to-back phone calls with Swedish prime minister Magdalena Andersson and Finnish president Sauli Niinisto, during which he urged both countries to drop their support for Kurdish “terrorists,” according to a readout from his office. Erdogan also pressured Andersson to drop an arms export embargo on Turkey, which initially passed in 2019 over concerns about Ankara’s role in the Syrian Civil War.

Turkey’s opposition to Sweden and Finland joining NATO—announced in the days following the two countries’ momentous decision to apply to the military alliance—is an unforeseen and potentially significant obstacle to the two countries’ aspirations of entering the alliance. Per NATO’s accession process, every existing NATO member must agree to allow a new member to join, meaning that any country can veto another country indefinitely over existing disputes. For instance, Greece vetoed the accession of the Republic of Macedonia for roughly a decade until the country changed its name to North Macedonia in 2019.