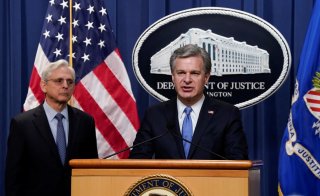 The Department of Justice announced on Wednesday that it had filed charges against four Chinese nationals and an American citizen accused of spying on critics of the Chinese government living in the United States.

The statement, released by prosecutors in the Eastern District of New York, indicated that the four men—Feng He, Jie Ji, Ming Li, and Keqing Lu—had assisted Shujun Wang, an American citizen living in Queens, in spying on Chinese dissidents. The statement accused each of the four men of working for China’s Ministry of State Security, or MSS. Wang, aged seventy-three, was arrested on Monday; the four men, who are thought to be living in China, remain at large.

The indictment against the men accused them of “covertly collec[ing] information about prominent activists and human rights leaders.” Wang’s targets allegedly included pro-democracy protesters in Hong Kong, supporters of formal Taiwanese independence, and activists seeking independence for Tibet and Xinjiang, two provinces associated with exiled separatist movements. The statement accused Wang of starting a pro-democracy movement in New York for the explicit purpose of collecting information on attendees, which he then shared with the four contacts through encrypted messaging as well as face-to-face meetings in China.

If convicted, Wang could be sentenced to up to twenty years in prison.

The Department of Justice’s charges against Wang came as part of a broader crackdown against perceived Chinese espionage in the United States. On Tuesday, Breon Peace, U.S. attorney for the Eastern District of New York, announced charges in two separate cases—including one against alleged MSS agent Lin Qiming, who has been accused of harassing a Congressional candidate who was a student leader during the Tiananmen Square incident in June 1989. Although that candidate’s name has not been released, his or her credentials are consistent with those of Xiong Yan, who is running for Congress in New York’s first congressional district.

A second set of charges for a separate espionage incident was filed the same day against Fan “Frank” Liu, Qiang “Jason” Sun, and Matthew Ziburis.

The Justice Department claimed that the charges filed would help to discourage future incidents of espionage by underscoring the penalties involved for participants. Matthew Olsen, the Assistant District Attorney for the Eastern District, claimed that the charges “demonstrate the Justice Department’s unwavering commitment to hold accountable all those who violate our laws in seeking to suppress dissenting voices within the United States and to prevent our residents from exercising their lawful rights.”