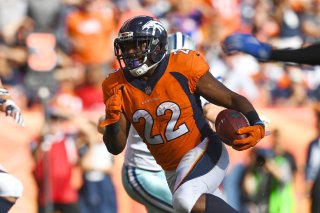 Now, ESPN will have its own exclusive streaming game.

On Wednesday, ESPN announced on Twitter that the first-ever ESPN+ exclusive NFL game would stream in Week eight of the season. The game will take place between the Denver Broncos and Jacksonville Jaguars in Wembley Stadium in London.

It’s been known since last year that ESPN+ would have one exclusive game each season through 2033, but the actual date and matchup of the game wasn’t announced until Wednesday.

Other games, such as the annual Monday night “Super Wild Card” playoff game, as well as some weeks of Monday Night Football, have been simulcast on ESPN+ and ESPN itself.

The games will also be available to watch on local television for those living in Denver and Jacksonville, the home markets of the two teams.

The match-up is part of the NFL’s annual series of games in London, and this one will begin at 9:30 a.m. Eastern time, giving fans back in the United States a chance to watch one more game before the standard Sunday afternoon games start.

The league announced a $113 billion media rights deal in March of 2021, set to run through 2033, which allowed for more streaming options than ever before. The deal brought CBS games to Paramount+, Fox games to Tubi, and NBC Sunday night games to Peacock, as well as the Amazon and ESPN+ deals.

"These new media deals will provide our fans even greater access to the games they love. We're proud to grow our partnerships with the most innovative media companies in the market," NFL commissioner Roger Goodell said in a statement.

One remaining streaming opportunity for the NFL is NFL Sunday Ticket, the out-of-market package that has been exclusive to DirecTV since it launched in 1994. The league’s contract with DirecTV runs out after the 2022 season, and the commissioner has made it clear that he prefers to bring in a streaming partner for that package.

According to various reports over the course of the last year, bidders for the package have included several of the existing broadcasting partners as well as both Apple and Amazon.

Puck reported in mid-April that Apple, which recently began to show baseball games on Apple TV+ in its first-ever sports deal, is likely to be the home of Sunday Ticket. However, there has been no official announcement about a deal in the weeks since.