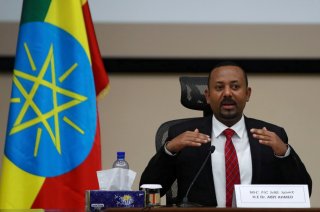 The Ethiopian government announced on Thursday that it would unilaterally impose an “indefinite humanitarian truce” in its northern Tigray region, indicating that a reduction in fighting would allow international humanitarian organizations to deliver aid to the famine-prone region.

The office of Ethiopian prime minister Abiy Ahmed claimed that he was “committed to exert maximum effort to facilitate the free flow of emergency humanitarian aid into the Tigray region,” according to a statement released on Thursday.

The statement also called on Tigray’s leaders to “optimize the success of the humanitarian truce” by “desist[ing] from all acts of further aggression and withdraw[ing] from areas they have occupied in neighboring regions.”

“The government of Ethiopia hopes that this truce will substantially improve the humanitarian situation on the ground and pave the way for the resolution of the conflict in northern Ethiopia without further bloodshed,” the statement continued.

The statement comes within days of a visit by David Satterfield, the United States special envoy for the Horn of Africa, to Ethiopia. The Tigrayans indicated that they would honor the ceasefire shortly after it was announced.

Although it has been overshadowed by Russia’s invasion of Ukraine, the ongoing regional civil war in Ethiopia remains the deadliest conflict in the world. Thousands of civilians on both sides have perished during the conflict, and millions have been internally and externally displaced, including 400,000 in Tigray. The war, which initially began in late 2020 when Ethiopian forces invaded Tigray to oust the ruling Tigray People’s Liberation Front (TPLF) from power, spread outside the province after the rebels defeated the invading army and launched a counteroffensive southward. At the same time, other separatist groups, including the Oromo Liberation Army, have launched concurrent revolts against the central government in Addis Ababa.

Prime Minister Abiy Ahmed, who was widely lauded for ending Ethiopia’s decades-long conflict with neighboring Eritrea in 2018 and received the Nobel Peace Prize the following year, has come under harsh criticism for launching the Tigray conflict and continuing to pursue it after evidence mounted of human rights violations by both sides.

The United Nations (UN) has also criticized Abiy for maintaining a blockade of Tigray, preventing food and other critical supplies from reaching the rebel government. The UN estimated in January that 40 percent of Tigrayans faced acute hunger, and fuel shortages in the region forced international aid workers to make food and medicine deliveries by foot.

Abiy’s government has deflected blame onto the rebels for supply shortages.