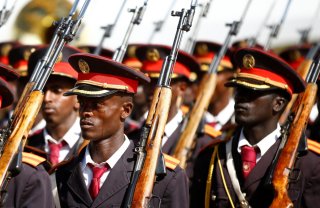 The Ethiopian and Eritrean governments reportedly launched a joint offensive against the rebels within Ethiopia’s northern Tigray region last week—raising fears about a significant escalation of the country’s ongoing civil war, only days after the two sides agreed to undergo African Union-mediated peace negotiations in South Africa.

The Tigray People’s Liberation Front (TPLF), the political party and armed movement that has led the Tigrayan side during the war, announced the offensive last week, claiming that Ethiopia and Eritrea had initiated an “extensive offensive” in northeastern Tigray. The TPLF statement urged Tigrayans to “further intensify their campaign of self-defense,” according to the Associated Press (AP). Neither Ethiopia nor Eritrea offered immediate comment on the military operation, although Ethiopian president Sahle-Work Zewde claimed on Monday that the Ethiopian government was willing to negotiate with the rebels without any preconditions.

Although both the Tigrayan rebels and the Ethiopian government agreed to a humanitarian truce in March, it fell apart in August, with both sides blaming the other for initiating hostilities. Since then, the African Union (AU) has attempted to mediate a renewal of the ceasefire. Although peace talks were scheduled to begin in South Africa on October 8, they have been delayed over logistical issues.

The new offensive has also reportedly disrupted humanitarian aid to Tigray, where roughly one million people are thought to be at risk of starvation. The region in northern Ethiopia is surrounded on all sides by opposing forces and has been under a blockade since November 2020, restricting the availability of food, medicine, and other services such as banking and internet access. Although the ceasefire allowed for an influx of humanitarian aid, the new offensive has virtually cut off the Tigrayans’ remaining lifelines to the outside world, AP reported.

Secretary of State Antony Blinken claimed in a statement on Friday that the U.S. government was “deeply concerned” about the escalation in Tigray.

“Eritrean and Ethiopian forces carpet bombing Tigray cities almost daily,” Ghebreyesus wrote in a tweet. “Civilians are being killed and the wounded that could have been saved are dying due to lack of treatment and urgently needed care. The siege must end and humanitarian aid [be] allowed in.”