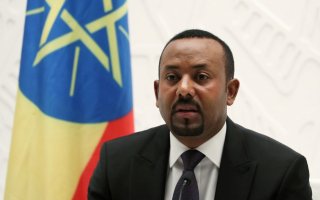 Representatives from the Ethiopian government and the Tigray People’s Liberation Front (TPLF), the Tigrayan secessionist group that governs most of Ethiopia’s northern Tigray region, have opened peace talks in Pretoria, South Africa, according to the South African government—marking the first formal diplomatic engagement between the two sides since the outbreak of war two years ago in November 2020.

“The peace talks, which have been convened to find a peaceful and sustainable solution to the devastating conflict in the Tigray region, started today, [October] 25 … and will end on [October 30,” Vincent Magwenya, a spokesman for South African president Cyril Ramaphosa, announced at a press conference on Tuesday.

Although South Africa has hosted the peace talks, they are primarily being conducted by representatives from the African Union. The AU’s delegation is led by former Nigerian president Olusegun Obasanjo and also includes former Kenyan president Uhuru Kenyatta and former South African vice president Phumzile Mlambo-Ngcuka.

The two sides agreed to the negotiations in late September. Although they were originally slated to begin on October 7, logistical delays on both sides led to a three-week delay. During the delay, Ethiopia launched a military offensive against Tigray, capturing three towns and leading to condemnation from the TPLF and several international organizations.

The Tigray war began in November 2020 after Ethiopia invaded the region to depose the TPLF, which Ethiopian prime minister Abiy Ahmed claimed had attacked army camps there. Although the national army was initially successful, capturing the Tigrayan capital of Mekelle within a month, it was forced to withdraw the following year. For most of the last two years, the war has been a stalemate, with occasional changes in territory but without significant gains on either side.

Throughout the conflict, Ethiopia and its northern neighbor Eritrea have maintained a blockade of Tigray, cutting it off from outside services such as banking and the internet and restricting its ability to import food and medicine. A ceasefire between the two sides in March temporarily lowered the fighting and allowed for humanitarian aid to resume, but the truce collapsed in August, prompting renewed fighting.

The war has led to hundreds of thousands of deaths, the overwhelming majority of them starving Tigrayan civilians. Millions of others have fled from the violence, creating a regional refugee crisis. A United Nations investigation in 2021 concluded that all parties had committed human rights violations.