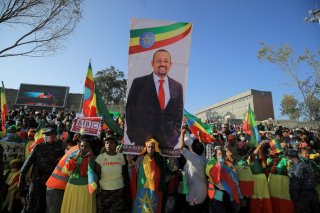 The government of Ethiopia and the Tigray People’s Liberation Front (TPLF), the separatist group fighting for the independence of Ethiopia’s northern Tigray region, each announced earlier in the week that they had agreed to participate in peace talks in South Africa mediated by the African Union (AU).

The two sides separately indicated that they had agreed to participate in discussions chaired by Moussa Faki Mahamat, the chairman of the AU and the former prime minister of Chad. The talks have been scheduled for the upcoming weekend; if held as planned, they will mark the first direct negotiations between the Ethiopian government and the TPLF since the onset of the conflict in November 2020.

Ethiopian national security adviser Redwan Hussein announced on Wednesday that Addis Ababa had “accepted [Mahamat’s] invitation,” which he described as “in line with our principled position regarding the peaceful resolution of the conflict.” The TPLF also accepted the invitation, although its statement noted that it was “not consulted prior to the issuance of this invitation” and therefore required clarification on the issues to be addressed.

The TPLF was initially founded in 1975 in opposition to the Derg, Ethiopia’s Cold War-era communist government. It soon grew into the largest rebel movement within the country, winning the 1991 civil war  and dominating the post-Derg government until the election of Abiy in 2018. Abiy, an ethnic Oromo from the country’s southwest, has accused the TPLF of attempting to reassert Tigray’s traditional dominance over Ethiopian politics, while the TPLF has condemned Abiy for trying to concentrate power in Addis Ababa and reduce Tigray’s regional autonomy.

In November 2020, negotiations between the two factions broke down, and Abiy sent the Ethiopian military into Tigray to reassert the government’s control over the region; although it successfully captured Mekelle, Tigray’s capital, by the end of the month, it was forced to retreat from the province altogether the following year.

Since 2021, the war has primarily remained a stalemate, but fighting has continued, and the United Nations has described the associated humanitarian crisis as the world’s worst. Tigray has remained isolated from the rest of the world since the onset of the war; the Ethiopian government has suspended internet, banking, and telecommunications services to the region and has maintained a blockade preventing the import of food, fuel, and medicine. A ceasefire in March led to hopes that the conflict would end, but it collapsed in August, prompting renewed fighting.