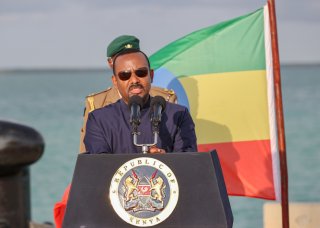 Ethiopian prime minister Abiy Ahmed announced on Tuesday that his government had established a committee to negotiate a peace deal with rebels in Ethiopia’s northern Tigray region—a move that could mark a consequential step towards ending one of the world’s worst conflicts.

Although Abiy did not provide detailed information on what the committee would examine, he indicated that he and Deputy Prime Minister Demeke Mekonnen would lead it and that it would provide a more detailed agenda for negotiations in ten to fifteen days.

A brutal civil war has raged in Ethiopia’s northern Tigray region since November 2020, when Tigrayan leaders organized a local election in defiance of the central government in Addis Ababa. Following early clashes between local officials and members of the Tigray People’s Liberation Front (TPLF), a Tigrayan nationalist rebel group active since 1975, Abiy launched an offensive against the province. Although the Ethiopian security forces initially captured Mekelle, Tigray’s capital, in late November, rebel activity continued in the province’s north, and a TPLF counteroffensive recaptured the city in June 2021. The conflict has since spilled over into the neighboring regions of Amhara and Afar, and other ethnic separatist groups—notably the Oromo Liberation Army (OLA) in Ethiopia’s southern Oromia region—have launched rebellions of their own, hampering the central government’s ability to engage the TPLF in Tigray.

Although the violence in Tigray has decreased since the government unilaterally imposed a ceasefire in March, the war has devastated the country, leading at least two million Ethiopians to flee their homes and pushing as many as nine million to the brink of starvation.

Abiy, elected to Ethiopia’s prime ministership in 2018, was widely lauded as a reformist prior to the outbreak of war in Tigray. In 2019, the prime minister was awarded the Nobel Peace Prize for his efforts to end Ethiopia’s two-decade conflict with Eritrea, its northern neighbor and former province. The citation further commended Abiy for abolishing press censorship, releasing political prisoners, and appointing dozens of women to prominent government positions.

However, Abiy’s detractors have also accused him of attempting to centralize power in Addis Ababa, disrupting Ethiopia’s traditional federal system and depriving the outer regions of autonomy.