The EU and Russia: Stuck Between Friendship and Enmity 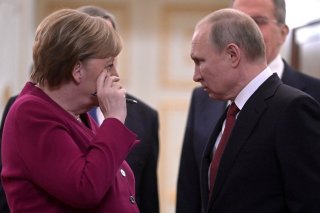 How much will Russia’s relations with Europe, and its most powerful country, Germany, change after the German elections of 2021? Remarkably little. Two realities will remain in play. First, Germany will remain Russia’s primary interlocutor on European affairs. Second, while Germany-led Europe will not become Russia’s adversary, it is unrealistic to expect a major improvement in this relationship. Irrespective of the outcome of the German elections, there are deeper systemic forces at play that will ensure that this relationship stays the same as it is today.

When one talks about Europe, an old Kissingerian problem emerges: “Who do I call if I want to speak to Europe?” Indeed, European nations have different perspectives on Russia. The leading two European countries Germany and France, want to pursue a reset with Russia. Italy and Austria are also open to doing business with Russia. As opposed to that, the post-Brexit UK defines Russia as its principal threat,  a perception shared by many former Soviet satellites in Eastern Europe, Poland, Romania and the Baltic states. In contrast, Hungarian prime minister Viktor Orbán is keeping an open door for Vladimir Putin.

On top of that, Russia prefers bilateral diplomacy to multilateralism as its strategic culture is focused on traditional great power politics, unlike the multilateral, post-modern Europe. Consequently, as the largest European economy and most influential member of the EU, Germany will remain the most important partner for Russia in Europe. With that in mind, the trust between Europe and Russia has been damaged in the past several years. The Ukraine Crisis, the 2018 poisoning of former Russian spy Sergei Skripal in the UK, the treatment of  Russian opposition figure Alexei Navalny, and allegations by the Czech Republic that Russian intelligence caused an explosion at a Czech arms depot in 2014 will remain open wounds. The EU’s chief diplomat, Josep Borrell, recently warned of an expected downturn in relations with Russia.

Despite the downturn, and irrespective of the outcome of German elections, the relationship will not change. The deep structural forces will ensure that the relationship continues in “neither friend nor foe” mode. The energy dependence on Russian gas will ensure that Germany does not pursue unnecessary hostility with Russia. In 2019, fifty percent of German gas imports came from Russia. The construction of the Nord Stream 2 pipeline across the Baltic Sea will increase that dependency. The German Green Party is critical of this project. However, Germany pledged to become carbon neutral by 2045; in doing so, Russian gas is the best shortcut as there are still 24 years ahead and 24 winters during which heating is needed. The willingness of the Biden administration to turn a blind eye on Nord Stream 2 will strengthen Germany to persevere on its current course.

There is also the issue of security. As the leading EU country, Germany needs to stabilize the Union, which had it rough from the eurozone crisis to the COVID-19 pandemic.  To do so, Germany needs, if not friendship with Russia, then the relative tranquillity on Europe’s eastern borders to focus on getting the European house in order. Germany is also unwilling to invest in a military force that could contain Russia as it continues to rely on U.S. security guarantees via NATO ensuring the status quo. Germany, also, cannot improve relations with Russia due to the deep opposition by the eastern EU members, who veto the Franco-German proposal for an EU summit with Russia. Germany will ensure that its own and Europe’s relations with Russia do not become hostile, but it is also not possible to improve them at this point in history.

Vuk Vuksanovic is a Ph.D. researcher in international relations at the London School of Economics and Political Science (LSE), an associate of LSE IDEAS, LSE’s foreign policy think tank, and a researcher at the Belgrade Centre for Security Policy (BCSP).