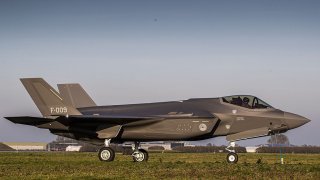 The United States Air Force, like much of the United States, has had to adjust to the new reality that has come about due to the novel coronavirus pandemic. This has included the postponement of the first two phases of the Air Force's Red Flag-Alaska exercises earlier this summer, but the coronavirus pandemic turned out to be a bright spot for the 356th Fighter Squadron, which was only reactivated last fall.

"The 356th FS is reactivating to bring F-35s out to the Pacific Theater," Lt. Col. James Christensen, 356th FS commander, said in a statement last year. "Looking back at the squadron history, the 356th Tactical Fighter Squadron was previously stationed in the Pacific for both the Vietnam conflict, and to defend Korea and Japan out of Kunsan Air Base and Misawa Air Base, respectively. We are excited to bring the squadron back to the (Indo-Pacific Command) theater."

Stars & Stripes reported that the unit, which is stationed at Eielson Air Force Base, Alaska, was the first F-35 squadron in the Indo-Pacific theater and as of the beginning of this month had received 11 of the Joint Strike Fighters, while 13 more are scheduled to be delivered by the end of next year.

"Our plan was to begin doing Red Flag training after we've gotten more airplanes and pilots, which would have been in October," Lt. Col. James Christensen, commander of the 356th, told Stars & Stripes.

Due to the coronavirus restrictions, the number of units that could participate in Red Flag 3 was limited, and as a result the 356th Squadron was invited to take part. This was reportedly the first Red Flag to focus training solely on F-35s and F-22 Raptors—the so-called fifth-generation fighter jets, which feature stealth capabilities as well as advanced avionics.

The F-35s from the 356th Fighter Squadron have been joined by twelve F-35s from Hill Air Force Base in Utah, along with 20 F-22 Raptor fighters from Joint Base Elemdorf-Richardson in Anchorage. In addition, 18 F-16s from Eilson's 18th Aggressor Squadron are taking part as the "bad guys" in various training exercises. In total, roughly 900 personnel stationed at Eielson and Elemdorf-Richardson are participating in the drills, while another 300 out-of-state personnel were temporarily assigned to Eielson to take part.

These exercises, which were designed to provide unique opportunities to integrate various forces in a realistic threat environment, date back to 1975 when it was held at Clark Air Base in the Philippines. At the time it was called exercise Cope Thunder.

The current operations include aircraft that primarily are based at, and fly from, Eielson and Elmendorf-Richardson. Service members are expected to fly, maintain and support aircraft from various units during the iteration of the exercises, which take part over the Joint Pacific Alaska Range Complex (JPARC). The exercises have been running from August 1 to August 16.

"The whole purpose of Red Flag is to give pilots their first taste of a combat-representative mission," Christensen added to Stars & Stripes. "When we do daily training in a squadron, we typically only train against maybe one other adversary or within the squadron. Occasionally we'll have another unit come in."

The 365th Fighter Squadron, which is assigned to the 354th Fighter Wing, was reactivated last year specifically to operate the Lockheed Martin F-35 Lightning II.

The unit had first been activated during the Second World War, when it flew North American P-51 Mustangs on escort missions for Eighth Air Bombers over Western Europe from mid-1943. It was later reequipped with Republic P-47 Thunderbolt fighters, and flew ground attack missions until the end of the war. It was deactivated in 1946, but reactivated as the 356th Tactical Fighter Squadron in 1956.

The unit took part in the Gulf War, when it was equipped with Fairchild Republic A-10 Thunderbolt II, but was deactivated again in 1992.