Ever Wonder How Aircraft Carriers Get Built? See Here For Yourself. 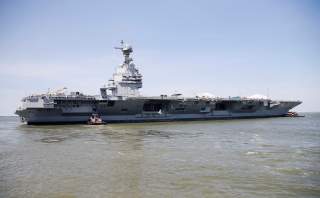 Key point: These giants of the sea and American power require years of planning.

United States of America: USS John F. Kennedy and USS Enterprise. The second of the new Gerald R. Ford class, USS John F. Kennedy will be the second aircraft carrier to bear the name of the thirty-fifth president of the United States. Kennedy, currently under construction, will be 1,092 feet long with a flight deck width of 256 feet. The ship will displace one hundred thousand long tons fully loaded and has a total crew, including ship’s crew, air wing and embarked Marines, of 4,450 personnel. Once complete, Kennedy will be capable of carrying more than seventy-five fixed wing manned aircraft, unmanned aerial vehicles, and helicopters.

USS Kennedy was laid down in August 2015 and is currently fifty percent complete. The ship is expected to be christened in 2019 and commissioned into service sometime around 2020. A third Ford-class ship, USS Enterprise, will enter service in 2027, and the navy is expected to ultimately order twelve Ford-class carriers over the next thirty years.

Issues with USS Ford’s electromagnetic aircraft launch system, or EMALS, drove navy officials to briefly consider bringing back time-tested steam catapults for Kennedy and Enterprise. The idea was ultimately abandoned, and both ships will sport EMALS for launching aircraft.

Prince of Wales will typically carry twelve to twenty-four F-35B fighters, plus fourteen Merlin anti-submarine and utility helicopters. In wartime, the number of fighters each can carry could rise up to thirty-six. Under an agreement reached between Washington and London, U.S. Marine Corps F-35B squadrons could fly from Queen Elizabeth and Prince of Wales until the UK’s own F-35B fleet is up to full strength.

Construction of Prince of Wales began in 2011 at Rosyth Dockyard, Scotland. The ship was officially named by Queen Elizabeth in 2017 and is currently in the fitting out process. The carrier is expected to enter sea trials in 2019 and be commissioned into service in 2020.

China: Type 003. China’s first carrier, Liaoning, entered service with the People’s Liberation Army Navy in September 2012. A second unnamed carrier, based on Liaoning, is currently under sea trials. Reports out of China indicate two more carriers are currently under construction. The two carriers are allegedly part of a new class known as Type 003.

Little is known for sure about Type 003. One hull is under construction at the Jiangnan Shipyard in Shanghai, with a second under construction at Dalian. The carriers are the first large ships being built in China with modern shipbuilding techniques, assembled from large prebuilt modules known as “superlifts” each weighing hundreds of tons. The carriers are expected to be conventionally powered as China’s seagoing nuclear propulsion program has been limited to submarines and needs to be scaled upwards for large surface ships.

The Type 003 carriers will almost certainly not feature ski ramps to launch aircraft. Both Liaoning and the second carrier featured ski ramps and were unable to launch propeller-driven support aircraft in the same class as the American C-2 Greyhound and E-2D Hawkeye airborne early warning and control aircraft. In addition, fixed wing aircraft were limited in fuel and weapon weight, drastically limiting their performance. The use of an EMALS-type launch system, however, will enable the new carriers to launch a full spectrum of aircraft types.

The size of Type 003’s carrier air wing is unknown, but it is expected to be incrementally larger than previous air wings. Depending on the size of the hull, the ship could accommodate as many as seventy aircraft of all types.

India: INS Vikrant. India, a country with a long naval aviation tradition, also has a tradition of operating ex-UK Royal Navy carriers. This tradition is set to end for good with the construction of INS Vikrant, India’s first indigenously constructed aircraft carrier. Construction of Vikrant is part of India’s dream of two fully modernized carriers, with a goal of three carriers down the road.

Vikrant, also known as Indigenous Aircraft Carrier One (IAC-1) began construction in 2008 at the Cochin Shipyard. Vikrant is a bit on the smaller side for conventional carriers, set to displace just forty-five thousand tons once complete, but it’s worth keeping in mind this will likely be the largest ship ever constructed in India. Vikrant will be 860 feet long with a flight deck width of 203 feet. Like India’s flagship INS Vikramaditya, Vikrant will sport a ski ramp for assisted takeoffs and arrestor cables for landing aircraft. The arresting gear and other equipment were procured from Russia.

Vikrant is expected to operate thirty aircraft, including twenty MiG-29k multi-role fighter jets and ten helicopters. Vikrant was expected to enter service in 2018 but production and licensing issues forced a delay of entry to October 2020. A second carrier, IAC-2 AKA INS Vishal, is in the design stages. Vishal is expected to tip the scales at sixty-five thousand knots, making her a third larger than Vikrant, and may incorporate U.S. carrier technology, particularly EMALS.

Kyle Mizokami is a defense and national-security writer based in San Francisco who has appeared in the Diplomat, Foreign Policy, War is Boring and the Daily Beast. In 2009 he cofounded the defense and security blog Japan Security Watch. You can follow him on Twitter: @KyleMizokami. This article originally appeared last year.