Everything You Wanted to Know About Russia's Nuclear Weapons and Strategy 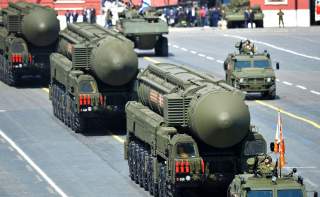 Why won’t they get rid of their tactical nuclear arms?

NATO has about 300 or so tactical nuclear weapons left in Europe, and we don’t know what to do with them, largely because all of their former Cold War targets were located in Warsaw Pact nations that are now actually inside NATO itself. Modernizing these aging battlefield weapons will be hugely expensive: the Obama administration has, after a great deal of agonizing, pushed for an upgrade, and has already run into trouble on Capitol Hill.

The Russians, however, still keep an inventory of some 2000 tactical nuclear weapons. Why?

One reason is that Russia, like NATO, doesn’t know what to do with them. Nuclear weapons cannot simply be left by the curb on “fissile-material removal day,” and these small weapons are likely safer under military control than they are in storehouses. The other reason, however, is that the Russian General Staff still thinks these weapons have some kind of utility. In 2011, the Russian Chief of the General Staff, Nikolai Makarov, said that he could not “rule out that, in certain circumstances, local and regional armed conflicts could grow into a large-scale war, possibly even with nuclear weapons.”

It’s hard to imagine the difference between a “local” and a “regional” conflict, especially when nuclear weapons are involved. Although Makarov growled at NATO in his statement, it’s also likely he was looking to his unstable southern borders with Islamic countries. In either case, Makarov’s point is directly related to an admission he and other Russian officers have made before: that without nuclear weapons, Russia’s ability to sustain a major conventional conflict in any direction is severely limited. Who the Russian military chiefs think they’re going to fight is another matter, but like all militaries, their job is to make plans, not policy. Makarov stepped down in 2012 and was replaced by the much younger Valerii Gerasimov (age 58), but what’s more worrisome in all this is that there are least some officers in the General Staff who see nuclear and conventional power as fungible and interchangeable, with one usable in place of the other. So far, they have not had a chance to test that theory.

So far, the answer seems to be yes. Over five years ago, Russia put forward a draft national security concept, a kind of white paper on Russian security, and it included language about preventive nuclear strikes. After raised eyebrows in NATO and elsewhere, a scrubbed version was rereleased, with the rest classified and held back. (In fairness, that’s how the Bush administration did its 2002 nuclear review, with the same poor public relations effect.)

For now, the Russians seems to have adopted the notion—again, as a function of their conventional weakness—that nuclear weapons can be used to “de-escalate” conflicts. It’s doubtful that the Russians are really believe that nuclear strikes (especially on the United States or NATO) could be de-escalatory, but in the absence of any other ability to project force, old Soviet habits are hard to break. On May 7, for example, the Russian military floated the idea of stationing nuclear-capable short range missiles in the Russian enclave of Kaliningrad if NATO increased its conventional forces in the region, a threat as unsurprising as it is meaningless.

Are they cheating on the INF Treaty?

For over a year, the Russians have been taunting the West by breaking, in spirit if not in letter, the INF Treaty. It’s a clever approach: they’re not actually building intermediate-range nuclear forces, they’re just taking long-range nukes and then testing them at intermediate range. In other words, they’re skirting the treaty, no doubt as a clear sign to Europe and NATO that they are not immune from nuclear attack in the brave, new post–Cold War world. Indeed, the Russians have openly mooted quitting the INF Treaty, even though the weapons they banned no longer exist and there are no Russian or American plans to make any.

The Obama administration’s usual approach to the Russians has been to lag behind more nimble Russian diplomacy, but in this case the administration’s low-key response is the right approach. What the Russians are doing is, in effect, goading NATO, and showing that they still have the old Soviet charisma that created NATO in the first place. It is not news that Russian nuclear forces can reach Europe; what’s different is that the Russians are trying to emphasize that capability by testing weapons as though the calendar is stuck on 1981.

In sum, the outlook for Russia’s nuclear forces is less important than the serious improvements Russia is seeking to make in its conventional forces, especially in Europe. The Russians have relied on nuclear arms to compensate for conventional weakness, a practice even Moscow realizes is unsustainable and dangerous. The real threat to NATO will occur if Western military forces on the ground continue to be hollowed out by budget cuts and a lack of purpose, while Russian forces continue to improve and to recover from the disarray of the Soviet collapse.

During the current crisis in Ukraine, many in the West and in Ukraine itself lamented the 1994 Budapest Memorandum, in which Russia, the United States, and Britain agreed to respect Ukrainian borders and sovereignty in exchange for Ukraine releasing any claims on the last remnants of the Soviet nuclear arsenal on its territory. If Ukraine had kept its weapons, the reasoning goes, Russia would never have dared to threaten Crimea and eastern Ukraine. But this is the wrong lesson: what seems to have given Moscow pause is the willingness of Ukraine, outnumbered and outgunned, to fight back. What may be serving to cool further Russian ambitions, in other words, is Russian conventional weakness. Had Ukraine kept its nuclear weapons, a Russian invasion might have taken place a decade ago on the pretext of “securing” those systems, but if Ukraine avoids a Russian invasion now, it will not be because of anyone’s nuclear arms, but because Russia is aware that it might face a serious conventional fight even against an admittedly weaker country.

If Moscow redresses those conventional shortcomings without an answer from the West, nuclear issues will seem, in comparison, like a quaint problem from the past.

Tom Nichols is Professor of National Security Affairs at the Naval War College and an adjunct at the Harvard Extension School. His most recent book is No Use: Nuclear Weapons and U.S. National Security (University of Pennsylvania, 2014) The views expressed are his own. You can follow him on Twitter: @TheWarRoom_Tom. This first appeared in May 2014.