Evolve or Die: The Navy's Aircraft Carriers Could Become As Obsolete as Old Battleships 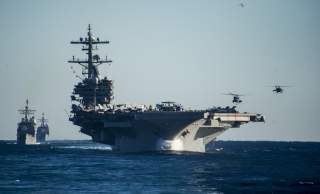