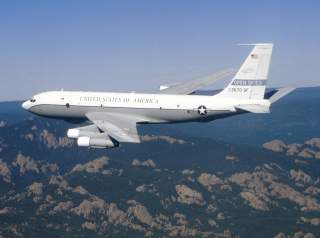 On Dec. 6, 2018, the Air Force deployed one of its OC-135 observation planes to Ukraine at Kiev's request. American, Canadian, German, French, Romanian and British observers were aboard the four-engine plane, the U.S. State Department stated.

The flight came two weeks after Russian security forces illegally seized three Ukrainian navy boats attempting to pass through the narrow, Russian-controlled strait connecting the Black Sea and the smaller Sea of Azov. "The timing of this flight is intended to reaffirm U.S. commitment to Ukraine and other partner nations," the Pentagon stated.

In fact, the OC-135 flew a comfortable flightpath deep inside Ukraine, according to Steffan Watkins, an independent security expert and imagery analyst. "They didn't fly over any contested areas," Watkins told The National Interest.

Russia backs separatist forces fighting Ukrainian troops in Ukraine's eastern Donbass region. But the OC-135 didn't fly over Donbass. Instead, it "made a teardrop shape from Kiev headed southish, staying around 20 kilometers from the border of Crimea," Watkins said.

The short-notice December 2018 flight qualified as an "extraordinary" mission under the terms of the 1992 Open Skies treaty, which allows the 34 signatory states -- including Russia, the United States and most European states -- to fly unarmed camera- and radar-equipped planes along pre-negotiated routes over each other’s territory, all for the purposes of monitoring military activities and verifying compliance with other treaties.

The treaty limits signatory states to using commercially-available sensors on treaty flights. As a result the cameras aboard the OC-135 can photograph targets only a few miles away. At a distance of 20 kilometers, or 12 miles, from Crimea, the OC-135 flying over Ukraine on Dec. 6, 2018 probably couldn't see Russian forces on the peninsula.

By contrast, when the U.S. Air Force deployed an OC-135 to Ukraine in the aftermath of Russia's February 2014 invasion of Crimea, the observation plane completed flights along both sides of the Russia-Ukraine border in close proximity to Russian troops.

"In 2014, they flew over actual positions with actual boots on the ground -- you know, actually doing something," Watkins commented. "This year it was just a little spin around on the plane."

"Maybe the toilet backed up," Watkins quipped, referring to the poor material condition of the two 1961-vintage OC-135s. A small group of U.S. lawmakers has tried for years to deprive the Air Force of funding for the Open Skies planes, part of a broader conservative campaign targeting America's international agreements.

Republicans in the House of Representatives, led by Rep. Mac Thornberry of Texas, tried to block the Air Force's $400-million request for OC-135 upgrades as part of the flying branch's 2018 budget. The U.S. Senate ultimately restored the funding.

Despite its poor condition, the OC-135 managed to complete its December 2018 mission over Ukraine. The U.S. State Department pointed to the flight as an expression of American resolve. "We stand with Ukraine against Russian provocative and threatening activity in the Sea of Azov," the State Department stated.

As a demonstration of resolve, the flight over Ukraine was a weak one, Watkins said. "I have no reason to believe there was any display of anything coming from that flight."