Experts: The U.S. Military Is an ‘Antiques Roadshow’ 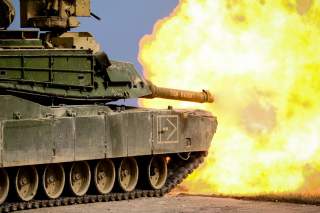 The U.S. military possesses way too much old, heavy weaponry that would be next to useless in a war with Russia or China, according to two experts at influential Washington, D.C. think tanks.

Two of those antiquated weapons were on display in the U.S. capital for Pres. Donald Trump’s controversial, and heavily militarized, July 4 rally, Thomas Mahnken from the Center for Strategic and Budgetary Assessments and Roger Zakheim from the Ronald Reagan Institute pointed out in a joint essay in The Atlantic.

The M-1 main battle tank and M-2 infantry fighting vehicle, both centerpieces of the U.S. Army’s heavy forces and both present for Trump’s event, “looked more like a military antiques roadshow than a display of a 21st-century military power,” Mahnken and Zakheim wrote.

The M-1 and M-2 “were designed in the 1970s and procured in large numbers during the 1980s,” the experts explained. “More than three decades later, they remain, albeit with modification, the mainstay of the U.S. Army and have been used in the wars in Iraq and Afghanistan.”

“The aircraft that flew over the capital echoed the theme of an advanced but aging force,” Mahnken and Zakheim added. The B-2 stealth bomber that flew over Washington, D.C. on July 4 is nearly as old.

Although it is an impressive aircraft able to evade enemy radar, the U.S. Air Force has fewer than 20 of them—far short of the 132 the Air Force originally envisioned purchasing when the bomber first took flight in 1988, and its successor, the B-21 Raider, has yet to make its first flight.

The two F-22 Raptors that flanked it are newer aircraft but, like the B-2, exist in only small numbers (187 rather than the 750 originally envisioned)—part of a production run that was truncated more than a decade ago when it appeared that the United States wouldn’t face sophisticated adversaries in the foreseeable future.

Now, in an era when China and Russia are manufacturing capable combat aircraft and air defenses, America’s non-stealthy aircraft are becoming more vulnerable. Decades after it was introduced, stealth is still working its way into the U.S. military—in the form of the F-35 plane that the Air Force, Navy and Marine Corps are procuring.

In the meantime, most U.S. combat aircraft are not stealthy and are less and less useful in high-threat environments. Indeed, as a result of a lack of aircraft-modernization programs over the past 30 years, the Air Force’s fighter force is half the size it was when the Berlin Wall fell, and has reached an unprecedented average age of 26 years.

Trump’s Independence Day rally was a strictly land- and air-power affair. But if it had included a naval parade, it would have highlighted the old-age problems and shortages afflicting the U.S. Navy, as well, according to Mahnken and Zakheim.

“The American people would have seen some new ships, perhaps one of the three stealthy Zumwalt-class destroyers that the Navy is buying, or some of the small littoral combat ships meant to serve a variety of roles.”

“They also might have seen Virginia-class nuclear-powered attack submarines—capable vessels that are nonetheless being purchased in numbers too small to keep our inventory from declining at a time when both China and Russia are increasingly active under the seas.”

The United States tends not to parade its nukes in public, like Russia and North Korea do. “Had Trump done so, the public would have seen not row upon row of new missiles, such as those that have appeared in recent Russian and Chinese parades, but rather a force of land- and sea-based missiles and bombers that date back to the late Cold War or its immediate aftermath.”

‘The Independence Day military display, and its imaginary sequel, show that the Defense Department took a quarter-century respite from thinking seriously about the need to fight wars against capable adversaries,” Mahnken and Zakheim wrote.

The wars of the future may depend not so much on the kinds of things you can put on parade, but on new technologies that reimagine warfare.

If America doesn’t invest in these areas, it’s unlikely that the next military display will be a victory parade.