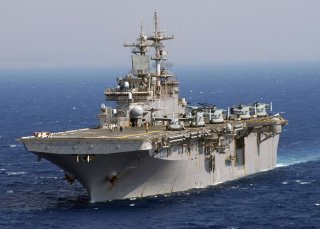 The Russian Navy’s only aircraft carrier, Admiral Kuznetsov was heavily damaged when a fire broke out on the warship while it was at its berth in Murmansk undergoing repair work late last year. The vessel is not expected to return to operational duty until at least 2022 or perhaps even later—leaving Russia without a single aircraft carrier in service.

Despite the fact that Russia has largely turned away from carriers—selling off former Soviet-era hulls to China and India—construction is underway for two amphibious assault ships, which will operate differently from a true carrier. The warships, which are under construction at the Zaliv Shipyard in Crimea will be capable of carrying both deck-based Ka-31, Ka-27 or Ka-52K helicopters and multipurpose gunships for special missions.

The first new domestic amphibious assault ships—Ivan Rogov and Mitrofan Moskalenko—were laid down on July 20. The Soviet Navy’s Ivan Rogov was the lead ship in a class of amphibious warship ships that entered service in 1978 and were unique for Soviet designs as the vessels featured a well dock as well as helicopter flight deck and hanger.

The two Russian Navy warships will be cable of carrying an air group of more than ten heavy helicopters. The multipurpose amphibious assault ships, which are also known as helicopter carriers, can be used to deploy the rotary combat aircraft in a variety of missions but can also be used to transport upwards of one thousand marine infantry personnel. The warships are also outfitted with a dock for landing craft that also enable the transporting of armor vehicles.

“The customer has set the task of ensuring the ship’s interaction with the land troops,” Renat Mistakhov, chief of the Ak Bars Shipbuilding Corporation told Tass. “We have been assigned the task of providing for a possibility of employing not only seaborne helicopters but also multi-purpose gunships so that they can temporarily land on the ship for the embarkation or disembarkation of a particular contingent.”

One of the major selling points of U.S. aircraft carriers is that these giant ships of war can also respond to disasters in a way other naval vessels can. Russia has taken similar steps to see how its new multipurpose amphibious assault ships could also react to a crisis and serve as floating hospitals.

“Our customer has indicated to us that today the issue of transforming this ship for a hospital vessel is being studied because a helicopter carrier has all necessary for that: cabins, cook rooms, separate premises, a helicopter hangar and a dock chamber,” Mistakhov added. “That is why, now at the design stage we are selecting the medical equipment that should be stationary and should always be inside the ship.”

The ability to transform a vessel to transport marines into one that could serve as a hospital ship has been considered since the design stages. This includes having medical apparatus and materials installed so that the ship can be converted to a full-fledged floating hospital if needed.

“Other equipment that is not required in combat operations will not be installed on multi-purpose amphibious assault ships,” explained Mistakhov. “A place will be reserved for it and an option of accommodating it will be worked out.”

Russia’s Defense Ministry had displayed an interest in acquiring hospital ships during the ongoing coronavirus pandemic when the Russian Navy’s hospital vessel Irtysh, which serves in the Pacific Fleet, was deployed to ease the burden on regional hospitals.

Russian Deputy Industry and Trade Minister Oleg Ryazantsev also told TASS at the Army-2020 International Forum on August 26 that the United Shipbuilding Corporation had offered several options of building new hospital vessels of various types, layouts, accommodation and classes for operation in coastal and distant waters. The Defense Ministry has said it will make a decision on building a fleet of such vessels, proceeding from available financial resources soon.