Explainer: What China's Naval Modernization Means for the U.S. Navy 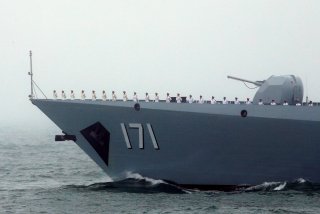 This is largely seen as a major concern for the Pentagon, as it will allow China to accelerate its shipbuilding technologies as well as related aircraft development, which will allow Beijing to build an imposing "blue water navy."

This is not an entirely new development, however. China has been steadily modernizing its navy for twenty-five years, since the mid-1990s, and it has become a formidable military force within China's near-seas regions. It has been transitioning from a "green-water" navy – a force that is designed to primarily provide coastal defense while beginning to acquire the ability to sustain operations on the open ocean – to a blue-water navy.

While not a true arms race, Washington and Beijing are now very much in a twenty-first-century great power competition.

"The biggest challenge for U.S. national security leaders over the next 30 years is the speed and sustainability of the [People's Republic of China] national effort to deploy a global navy," retired Capt. James Fanell, who previously served as head of intelligence for the Pacific Fleet, told National Defense.

The U.S. Navy has already taken a number of actions in recent years to counter Beijing's naval modernization efforts, and this has included a shift in the number of U.S. Navy warships in the Pacific. The U.S. Navy has assigned its most-capable new ships and aircraft, along with its best personnel, to the region; while it has maintained or increased general presence operations.

The United States Marine Corps has also begun a transformation to become a lighter and faster force that could take a fight across the Pacific Ocean to confront the Chinese.

However, another concern should be that China isn't the only power looking to expand its naval capabilities. Moscow is also modernizing the Russian Navy, so in the future the U.S. Navy could be further pressed to face regional and global threats.