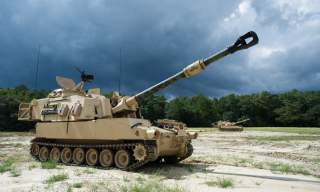 On March 6, a hulking armored howitzer prototype stood motionless in the desert of the Yuma Proving Grounds of Arizona, its outsized cannon barrel angled steeply upward. Abruptly, the 29-foot-long gun kicked into action, rocking the over 31-ton vehicle back on its tracks as it spits out a 155-millimeter shell.

Forty miles away—and likely well over a minute later—the 106-pound shell came plunging down just a few meters besides an inoffensive SUV, the erupting shrapnel and overpressure wave from its high explosive warhead doing no favors to its structural integrity.

The test shot, which you can view here, was one of two accurate 40-mile shots performed that day by the XM1299 prototype Extended Range Cannon Artillery (ERCA). The shells tested included a boosted version of the GPS-guided M982 Excalibur precision-strike shell as well as the new experimental XM1113 Rocket-Assisted Projectile.

An earlier article delves into why the Army prioritizing a variety of projects to dramatically extend the range of its artillery following years of neglect and failed programs for its big guns and rockets in a new initiative called Long Range Precision Fire.

The Paladin’s New Suit of Armor

The ERCA program seeks to upgrade the Army’s venerable M109 Paladin self-propelled howitzers, which first saw action in the Vietnam War a half-century ago. Currently, the M109 can strike targets up to 19 miles way, or 25 miles using special ammunition

With its huge turret, the M109 resembles an oversized tank, though in reality it’s only armored versus small arms and shrapnel, and isn’t intended to engage enemies with direct fire. The Paladin belongs to a lineage of British and American armored self-propelled howitzers with ecclesiastical names (Bishop, Deacon, Sexton, Abbot, etc.) starting with the World War II-era M7 Priest, so named for the raised “pulpit” of its commander’s cupola.

The Army’s M109A6s will soon undergo modernization to the M109A7 PIM model which swaps the original hull out with one based on the Bradley fighting vehicle, while the vehicle turret was earlier replaced in the A6 model. The PIM has better mine protection, much improved mobility (the overweight M109A6 tends to fall behind armored columns) and electrical generation which can be used to power additional digital systems. However, fielding in 2020 has been delayed and early production vehicles recalled due to manufacturing quality and capacity shortfalls.

The Army first plans to achieve greater range by installing a longer, stronger XM907 gun that weighs 1,000 pounds more and has a barrel that’s 58 calibers long (that is, 58 times the diameter of the gun barrel), up from A6’s 39 caliber gun. This will generate more pressure, spitting out the shell faster and further—but it also required development of the more advanced XM1113 rocket-assisted shell that could safely withstand that pressure.

In 2018, the Army first tested the lengthened gun on a towed M777A2 howitzer system and achieved a 38.5-mile range shot. (The longest Marine artillery shot on record in combat is a 22-mile strike using a precision-guided Excalibur round in Afghanistan in 2012.) Then in July 2019, British defense giant BAE was contracted to build a prototype M109 Paladin boasting the new XM907 gun—leading to the successful test shots in March 2020.

Next, the Army plans to prototype a mass production model, with the first three ERCA Paladins batteries (18 vehicles) to enter service in 2023.

However, the long-barrel Paladin will need to leap a major hurdle: mobility tests. Afterall, longer barrels can unbalance a vehicle and are prone to sustaining damage while in transit, reducing accuracy. So, Army testers will need to determine just how significant the problem is with the XM907, and what fixes can be implemented to mitigate those problems.

However, the Army doesn’t plan to stop with a 40-mile gun. LRPF program chief Gen. John Rafferty has asserted he believes it should be possible to achieve ranges in the ballpark of 60 to 80 miles by combining the new lengthened barrels with an exotic technology: ramjet-boosted artillery shells.

Ramjets are a type of jet engine which use (very fast) forward motion to compress air instead of a compressor. The Norwegian firm Nammo proposes ammunition which uses solid-fuel-boosted ramjet to accelerate shells blasted out of the barrel to three times the speed of sound for fifty seconds. The shells would be guided for precision firing and steered using guidance canard fins—supposedly allowing a single shot to service targets as efficiently as a dozen of unguided shells (though a guidance method has yet to be specified). Nammo claims its ramjet shells could traverse up to 150 kilometers (93 miles).

This seems impressive—and expensive, given that each shell would contain its own jet engine! How expensive will determine the idea’s viability as much as its technical performance. The Army is already willing to pay $70,000 per shot for the M982 GPS-guided shell, but it probably won’t accept $800,000 shells like those the Navy rejected for its Zumwalt-class stealth destroyers.

Another project the Army hopes to implement once the longer-barrels are installed is an auto-loading mechanism to replace the Paladin’s human loader and increase the maximum rate of fire from three rounds per minute to ten.

Now, 10 rpm would be unsustainable for any lengthy period due to barrel over-heating and limited ammunition supply. But as the vast majority of casualties are inflicted in the first few minutes of a bombardment before adversaries had had time to seek cover, the ability to briefly triple shell output during that period could prove effective. Field testing is due in 2021, with possible implementation in 2024.

Whether or not these later upgrades pan out, the long-barreled Paladin and its special ammunition appear to be progressing briskly compared to other Army modernization efforts. If successful, Army howitzer units will multiply the amount of terrain they can cover many times over, and again outrange their peer competitors. That means land-based artillery units could relieve the burden placed on drones and aircraft to perform precision strike missions, stay a safer distance away from enemy counter-battery fires, and even aid air power by knocking out enemy surface-to-air missile systems.

It’s also worth keeping in mind that the ERCA program is only the shortest-ranged (but highest volume) tier of a broader modernization effort which seeks to extend the range of its multiple-rocket launchers and develop much longer-range Precision Strike Missiles (310 to 434 miles) and even an 1,100 mile-range Strategic Long-Range Cannon.

Sébastien Roblin writes on the technical, historical and political aspects of international security and conflict for publications including the The National Interest, NBC News, Forbes.com and War is Boring. He holds a master’s degree from Georgetown University and served with the Peace Corps in China. You can follow his articles on Twitter.