With an Eye on China, U.S. Navy Sends Fifth Attack Submarine to Guam 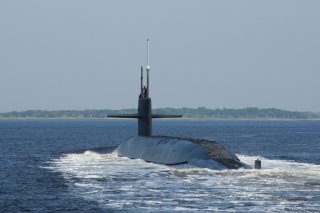 In an April 10 statement, the United States Navy announced that it would station an additional Los Angeles-class submarine at Guam in order to further strengthen the island’s defenses.

The U.S. Navy explained the rationale behind the stationing decision in a statement, saying that “the security environment in the Indo-Pacific requires that the U.S. Navy station the most capable ships forward.”

“This posture allows rapid responses for maritime and joint forces, and brings our most capable ships and submarines with the greatest amount of striking power and operational capability to bear in the timeliest manner.”

The USS Annapolis is now the fifth Los Angeles-class fast-attack submarine stationed at Guam and joins the USS Asheville, the USS Key West, the USS Jefferson City, and the USS Springfield.

"As part of the U.S. Navy's plan to put the most advanced and capable units forward, USS Annapolis completed a homeport shift from San Diego, California to Guam in order to support Indo-Pacific initiatives and missions," Capitan Bret Grabbe, Commodore, Submarine Squadron 15 explained.

The Los Angeles-class submarine is one of the most capable in the world and also offers commanders a great deal of flexibility. The class is capable of undertaking anti-submarine warfare, can target surface ships and some targets on land, and can perform surveillance and reconnaissance.

"My Sailors keep close tabs on world events, especially those in the Indo-Pacific region," the commanding officer aboard the USS Annapolis explained. "We're ready to get to work."

Guam is one of the United States’ western-most outposts in the Pacific Ocean, a node nearly 4,000 miles west of the Hawaiian Islands and of high strategic significance.

Deep in the Pacific, Guam is also vulnerable. In the event of a conflict in the western Pacific, the island would be a prime target for the People’s Liberation Army Navy, China’s naval force.

The island is so important that the U.S. Navy recently floated the idea of permanently stationing its aged Ticonderoga-class cruisers to leverage the ship’s robust air defense capabilities.

Though defending Guam would not be easy, adding a fifth fast-attack submarine to the island would complicate the calculus for an attack by the People’s Liberation Army Navy.