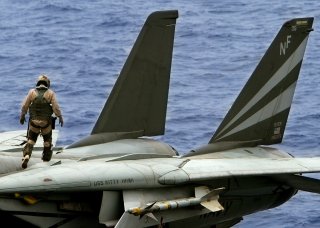 Today, the F-14 Tomcat is mostly known for its operational history during the Vietnam War, its starring role in “Top Gun,” and its anachronistic continued usage by the Islamic Republic of Iran. However, a point that is often missed in discussions of the F-14 was its revolutionary dual design purpose: it was created as a fleet defense interceptor but was fully capable of taking on an air superiority role as well. As Matthieu Pickens observed on Quora, “The F-14 wasn’t supposed to be a one-trick pony like the F-15”—which was designed as a pure air superiority aircraft.

Owing to space constraints on aircraft carrier decks, the U.S. Navy was not able to operate multiple classes of aircraft, each suited for a single mission. The Navy needed a single aircraft design that could handle both defense and interception missions. And the F-14 fit the bill perfectly.

“When you only have four acres to work with,” Pickens observes, describing the confines of the carrier deck, “having an aircraft proficient at multiple jobs is a must. To solve these diametrically opposed mission sets, the engineers came up with a radical solution. They designed the plane to have the internal fuel capacity for the fleet defense mission, but without the added weight and drag penalties necessary to carry the AIM-54 Phoenix missile for the air superiority mission. They did this by developing pallets to carry the Phoenix missiles rather than designing permanent fixtures for them like on the later MiG-31.

The ultimate result of the Vietnam War, Pickens argued, was that the Navy learned to prioritize nimble fighters over well-equipped ones, in order to better escort other attack aircraft. For this reason, “The heavy and draggy center-line pallets have been removed. Even without the external tanks, the F-14 had an unrefueled combat radius of 500 miles. Even without the pallets, the Tomcat still had the flexibility to carry other stores on the outer hardpoints as the mission required.”

What is beyond dispute is that the F-14 Tomcat is one of the first and most effective multi-role fighters of all time. In the United States, the aircraft was phased out, replaced by the F/A-18 Hornet and, later, the F/A-18E and F/A-18F Super Hornets. These planes have clear design inspirations – and intended missions – from the F-14, as well as from the Northrop YF-17 Cobra.