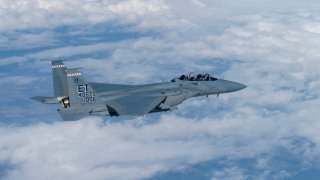 Last month, the Boeing F-15EX Eagle II program reached a new milestone. While flying over the Gulf of Mexico on January 25, an F-15EX Eagle II successfully fired an AIM-120D missile. The aircraft, which was operated by the U.S. Air Force's 40th Flight Test Squadron, pursued a BQM-167 aerial target drone during a test flight.

The exercise was part of the 53rd Wing's Combat Archer program, an air-to-air weapons system evaluation program (WSEP). During the flight, the F-15EX detected the drone using onboard sensors, acquired a weapons-quality track, and launched the missile at the target. After tracking the missile's release and flight toward the BQM-167, the shot was determined to be a success, at which point the missile flight was terminated, the Air Force announced.

The successful release marked the first weapon fired from the F-15EX, an upgraded version that will replace the Air Force's F-15C legacy fighters. January's test was the most recent and significant milestone for the program, and it follows more than six months of integrated developmental and operational flight testing for the shot.

"This was an end-to-end verification of the entire weapons system, which will pave the way for more complex missile shots in the future," said Colton Myers, F-15EX test project manager with the Operational Flight Program Combined Test Force.

In addition to being the first F-15EX live-fire exercise, it was also the first missile shot for experimental test pilot Maj. Benjamin Naumann. A large part of Combat Archer is providing firsthand, live-fire experience, and the Air Force noted that many pilots perform their first live-fire at WSEP.

"I am humbled to have the opportunity to fire the first weapon, but the bigger success is the verification of the F-15EX capability to live-fire a missile," Naumann said. "This shot is another important step towards fielding the aircraft to combat units."

Such test flights are not simply "business as usual." Along with challenging weather conditions, extra safety precautions, and aircraft settings, test aircrews also have to account for and fly at specific test parameters when firing to ensure that the appropriate data is collected for analysis.

"Ultimately we’re a part of an iterative development process, validating expected results and providing feedback to the team on successes or things to improve," Naumann said. "We act as the liaison to bring combat capabilities to the warfighter."

Latest Milestone For the F-15EX

The Air Force was also quick to address the progress the F-15EX program has made. While still a fourth-generation fighter, the F-15EX is loaded with newly adapted technologies and is designed to be further upgradeable, which could make it a viable and lethal attack platform for years to come.

The Air Force currently has two operational F-15EX test planes. The Eagle II is anticipated to join the F-35 Lightning II, F-16 Fighting Falcon, and A-10 Thunderbolt II along with a sixth-generation fighter program as part of the “four-plus-one” concept intended to streamline the fleet.

The missile shot is simply the latest of the many milestones for the F-15EX test team at Eglin Air Force Base. Only two months after its arrival, the F-15EX deployed to Northern Edge in Alaska, where the aircraft was pushed to its limits in a multiservice exercise and a significant amount of data was collected on the aircraft’s performance.

"The fact that both aircraft were able to turn around from a streamlined acceptance period and immediately deploy to a major exercise is a testament to the maturity of this platform, as well as the expertise of the combined test team as a whole," Colton Myers added.

Following the deployment, the F-15EX underwent developmental flight and ground tests to assess its survivability in various electromagnetic environments. This series of tests resulted in the resolution of issues identified in the F-15EX's Suite 9 software system, which led to a more mature and stable product, according to Myers.

"For a new platform, we’ve made an incredible amount of progress in a short period of time," Myers said. "I don't know of any other platform that has undergone such a rapid test program and it’s been incredible to be a part of the team that’s bringing this to reality."

Last October, the F-15EXs were deployed to Nellis Air Force Base and took part in an exercise focused on the air-to-air dominance mantle that it will inherit from the F-15C. That exercise proved that while the platform still needs more development, it is completely capable of fulfilling its expected air dominance role, according to Myers.

"The combined [developmental testing and operational testing] strategy has been critical to our test success, allowing us to break the mold of 'traditional' testing, while ultimately resulting in an overall better product for the warfighter, and in a shorter timeline than if we adopted the traditional approach," Myers added.

With these recent tests, the F-15EX is one step closer to taking on that air dominance role.