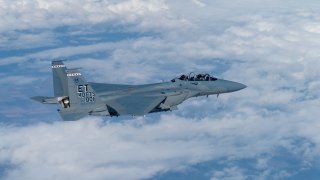 This week the United States Air Force announced that the Boeing-built F-15EX Eagle II recently completed its first-ever operational test mission while paired with F-15Cs and F-15Es at Nellis Air Force Base (AFB), Nevada. It was a significant milestone for the aircraft, and it certainly highlighted the capabilities of the advanced aircraft.

By all accounts, the F-15EX should be seen as a highly capable aircraft, yet it is still a fourth-generation fighter—even if it is one loaded with newly adapted technologies that promise the ability to keep the platform upgradeable for years to come. The Air Force has accepted delivery of two of the aircraft to date and is anticipated to join the F-35 Lightning II, F-16 Fighting Falcon, and A-10 Thunderbolt II along with a sixth-generation fighter program, as part of the four-plus-one concept intended to streamline the fleet in the years to come.

Boeing has touted the F-15EX as a “ready-now replacement” for the F-15C—and has proclaimed that it could serve as a backbone fighter for the Air Force for decades to come. All of that is absolutely true and even admirable and impressive.

Yet, experts are also quick to point out that even as great of a platform that the F-15EX may be—it absolutely shouldn’t be seen as a replacement or even an alternative to the F-35.

“As capable as the F-15EX is—and it is truly a great airframe—it isn’t suited to the threat that it could face in the years to come,” said Heather R. Penney, senior resident fellow for the Mitchell Institute for Aerospace Studies, and a former U.S. Air Force F-16 pilot.

Penney, who had also explained to this reporter why the F-22 Raptor program shouldn’t have been cut short, warned that the Air Force could be making a bigger mistake with the F-15EX.

“We’re being shortsighted,” Penney said bluntly. “The F-15EX could be a short term, short gap solution, but we need to ask how long can it be a relevant platform in the future. It is a fourth-generation aircraft that lacks many of the key attributes of fifth-generation aircraft.”

Most notably that would be the stealth capabilities of the F-22 and F-35.

“It is important to note that stealth doesn’t make you invisible nor does it make you invulnerable,” Penney added. “But when you confront an adversary today low observability is one the aspects that make the kill chain that much harder.”

The Air Force could be described as being somewhat penny smart and pound foolish, especially as many military aviation experts have continued to address the fact that maintaining a fleet of fourth-generation aircraft won’t be more cost-effective even in the short term, and investing in “new” fourth-generation fighters could allow our potential near-peer adversaries to leapfrog to far more capable aircraft.

“Given the financial tradeoffs the funding could be better used to get more F-35s in service, but also to truly jumpstart a new fighter program and advance our efforts to replace the aging fighter fleet,” said Penney. “We should have never been put in this position. I can understand why some view the F-15EX as a viable option, but we should be thinking about future capabilities, not about improving an old design.”