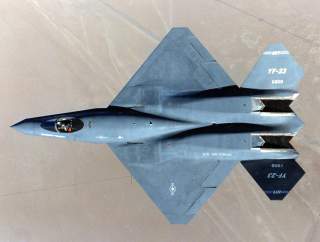 Though the United States Air Force’s Advanced Tactical Fighter (ATF) competition was decided almost thirty years ago in 1991 with what would become Lockheed Martin’s F-22A Raptor emerging as the victor, the battle between the YF-22 and the Northrop YF-23 still fascinates many to this day.

While the Raptor has evolved into the single most capable air superiority fighter ever built, the YF-23 design—especially when combined with General Electric’s YF-120 variable cycle engines—was arguably more advanced. Compared to the YF-22, the YF-23 was faster and stealthier, but many have argued that it was less maneuverable than the thrust vector controlled precursor to the Raptor. However, the difference in maneuverability between the two designs was far slimmer than many might have imagined.

“Interestingly the YF-22 and YF-23 had exactly the same trimmed AoA [angle of attack] of 60° [degrees],” Paul Metz, who was Northrop’s test pilot for the first YF-23 prototype and who later became Lockheed Martin’s chief test pilot for the F-22, told me in an email in 2015. “The YF-23 could do it without thrust vectoring. Those V-tails are very powerful especially when coupled to an unstable airframe.”

It is true that the YF-22 with its thrust vectoring capability did have a slight maneuverability edge at very low air speeds. “The YF-22 probably had an advantage at very, very low airspeeds but neither company had enough time to investigate dynamic low speed, high AOA maneuvering,” Metz wrote. “This was a good example of how a competition needs to consider the PR [public relations] value of flight test events. Lockheed understood this and did high AOA and shot missiles and pulled 9Gs.  All single point, benign condition events but they left an impression.”

One of the reasons Lockheed succeeded in the ATF competition was because the company understood its audience. The then newly formed Air Combat Command (ACC) was dominated by fighter pilots who continued to place a significant premium on within visual range (WVR) dogfighting performance, and the market savvy Lockheed team understood this internal Air Force bias towards a more maneuverable fighter.

“ACC pilots were enamored with dog fighting and Lockheed gave a good visual demonstration of high AOA (albeit a very limited and benign test). Northrop chose not to do high AOA during DemVal [Demonstration and Validation] [and] that was a mistake,” Metz wrote. “Both airplanes could do the same exact maneuver (trimmed, high AOA). As it was, the YF-22 ‘appeared better’ because they did something visually exciting and Northrop couldn't (or so it was inferred).”

Ultimately, the Air Force selected Lockheed’s YF-22 design, which was also an exceptional aircraft, for its ATF requirement. The YF-22 would eventually evolve into today’s F-22A Raptor, which became operational in late 2005 and remains the single best air superiority fighter ever built. However, in many ways, the YF-23 was a superior design that was well ahead of its time. Though it was not the only factor involved, the Air Force simply had more faith in the Lockheed team to manage what became the Raptor program.

To learn more about the YF-23, one should read Metz’s excellent book Northrop YF-23 ATF (Air Force Legends Number 220) where he details a comprehensive history of this incredible jet. Metz covers everything from the origins of the ATF requirement, to alternative Northrop designs for the program to the moribund FB-23 bomber proposal of the mid-2000s. It is definitely one of the best histories of the ATF program written to date.