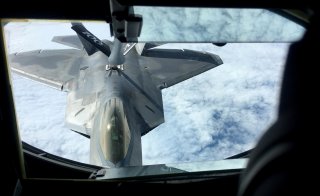 The program is designed to ensure that at least four F-22 jets can attack anywhere on an urgent, fast-strike basis by in part being dispersed across the globe with ready crew, C-17 Globemaster III support, and fuel and weapons necessary for “first strike” capability in otherwise tough to reach parts of the world.

This “Rapid Raptor” program, which spans across key hotspots and remote areas throughout a wide range of potential operating environments, may likely be informing the Air Force’s “Agile Combat Employment” strategic exercises intended to disperse basing and staging areas to enable rapid deployment. In a recent exercise, F-22 jets from Joint Base Elmendorf-Richardson in Anchorage flew to a smaller airport three hundred miles southwest.

“By operating from forward operating locations such a King Salmon, we are proving our strategic flexibility, freedom of movement and our ability to develop and to execute proactive and scalable options for future missions,” Brig. Gen. William Radiff, deputy commander of North American Aerospace Defense Command Alaska Region,” said on Twitter.

Most air attack contingencies, it seems almost self-evident, are likely to include F-22 jets as among the first to strike; the aircraft is designed to engage and destroy enemy air threats and also use stealth to destroy enemy air defenses—creating an “air corridor” for other fighters. Although not intended to function as a higher altitude stealth bomber, an F-22 jet is well suited to a mission objective aimed at destroying enemy aircraft, including fighters, as well as air defenses.

Placing an F-22 jet potentially three hundred miles closer to a point of attack, as was done in this exercise, decreases the potential need for refueling, massively decreases time to attack and clearly helps mitigate the access and deployment challenges inherent to greatly dispersed or expansive geographical areas such as the Pacific theater or Arctic region.

The Rapid Raptor program was actually developed by Air Force Pacific Command and has been expanded worldwide by Air Combat Command. It would make a lot of sense for this kind of program, which sent F-22 jets to Europe as far back as 2015, to grow worldwide to encompass key vast, difficult to reach areas in the Arctic.