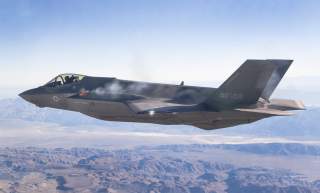 The F-35 stealth fighter is getting cheaper to buy and operate but the plane’s networked logistical system still doesn’t work.

But problems with the Lockheed Martin-made stealth fighter’s Autonomic Logistics Information System have hindered the military’s efforts to stabilize and drive down costs while also improving the F-35’s readiness.

Lockheed since the early 2000s has delivered around 400 F-35s to the U.S. Air Force, Navy and Marines Corps against a total Pentagon requirement for around 2,300 of the single-engine planes. The F-35 is on track to replace many of the military’s older fighters including F-16s, F/A-18s and AV-8Bs.

Lockheed’s ALIS was supposed to simplify the F-35’s logistics. Pilots and maintainers can use the computer-based system to plan missions, order spare parts and view technical data.

But ALIS never has worked right. The Pentagon is already looking for a replacement system even as it struggles to get ALIS to function, Cohen reported.

Fick said the Pentagon is fielding ALIS 3.5, an updated version that includes around 300 fixes. “That comes as Air Force software coders, employees of F-35 manufacturer Lockheed Martin, and others continue to roll out software patches for the jet and ALIS,” Cohen added.

“Over the past year, the department has delivered three ALIS software updates and we are on track to release quarterly releases to rapidly improve current performance—a vast improvement from the 18 months between software updates in the past,” Pentagon acquisition chief Ellen Lord chimed in.

“Our efforts to stabilize and improve the usability of ALIS has driven trouble reports down 38 percent from their peak,” Lord continued. “These efforts mitigate risk while the department charts a path to the future of ALIS that will help deliver a more ready fleet at a lower cost."

But ALIS’s days are numbered. Lord “told members of the House Armed Services readiness and tactical air and land forces subcommittees the Defense Department is working on a detailed plan for ‘ALIS Next,’ a redesigned version of the baseline system,” Cohen wrote. “DOD is still figuring out when a rearchitected ALIS could become available.”

“With the delivery of the ALIS 3.5 capability this month, we anticipate there will be no further major releases on the legacy ALIS system, only minor enhancements as required,” Fick said. “Block 4 ALIS capabilities will be rolled into a government-managed backlog, and we will focus on delivering a modern maintenance system.”

Besides not working for planning and maintenance, ALIS has proved to be controversial with some foreign F-35 users. Two unspecified U.S. allies even threatened to quit the F-35 program over data-security concerns.

“Some partners on the F-35 program worried that data flowing through ALIS to the United States — and to Lockheed Martin — could give both the U.S. military and the American defense contractor a window into that country’s flight operations, including when and where its F-35s are flying,” Defense News reported.

Despite lingering problems, the F-35 program is in little danger of cuts or cancelation. The Air Force is even considering retiring some older aircraft types years early in order to free up billions of dollars to spend on newer technology including the F-35.

Todd Harrison from the Washington, D.C.-based Center for Strategic and International Studies proposed that the flying branch could eliminate the KC-10 tanker, the E-3 radar plane, the B-1 bomber and the A-10 attack jet, among other types.