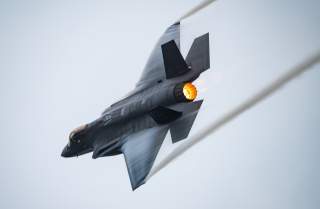 A few years back, the U.S. Senate confirmed what an Air Force general hinted at in February 2016 — and which should have been obvious for years to close observers of U.S. air power.

It’s “almost like three separate production lines,” Bogdan said, according to Air Force magazine. A real joint fighter, the program boss said, is “hard” because each branch is adamant about its requirements. “You want what you want,” Bogdan said.