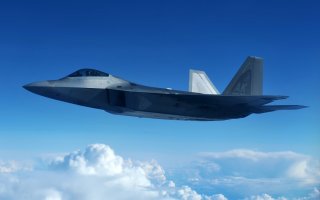 Even if an F-22 and F-35 are able to share information two-ways in combat across radio datalinks and other innovations to pass targeting data, conduct surveillance, and even execute attacks, there is still the problem of detectability.

As stealth platforms, the intent is to not be detected. Yet radio frequencies emit an electronic signature which, if even reasonably secure, can emit a potentially detectable radio frequency signal. Radio interference, jamming attempts, and electronic warfare are basically considered as a “given” in any kind of future warfare scenario. Therefore introducing the question as to whether there can be some kind of data connectivity that is less detectable to an enemy such that 5th-generation aircraft can sustain its stealthy characteristics.

Northrop Grumman is now testing the Freedom 550 radio engineered to preserve stealth mode through integrated software-defined radio. It works by sending Internet Protocol (IP) packets of data through waveforms to transmit combat-relevant information. Colin Phan, the Director of Strategy and Tech Communications for Northrop Grumman, explained that there can be one multi-function box that does as many as twenty-five different functions. Stealth mode is sustained, Phan explained, by using a smaller number of modules to connect the two data links together through a converter. Fewer modules help preserve stealthy communications by virtue of decreasing the emissions of an omnidirectional antenna which is more likely to be detected. The broader the signal and the wider the emission, the larger the potentially detectable electronic signature, something which can of course present a risk of being detected. In recent years, the Air Force has already succeeded in engineering a two-way connectivity exchange between F-35 jets and F-22 jets through LINK 16, however, the existing datalink does not enable stealth mode. The Freedom 550 system, by contrast, does.

“I can share data back to the Joint Force. We are essentially picking up data and sharing that data back and forth with Naval things like Air and Missile Defense, ongoing fires and then we can reverse to where you can put data back into it,” Phan said.

The technological foundation for all of this is woven into advanced computing applications, many of which are making rapid progress with the use of AI and Machine Learning, Jenna Paukstis, Vice President, Communications Solutions, Networked Information Solutions Division, Northrop Grumman, told The National Interest.

“With AI we can make decisions at speed in real-time,” Paukstis said.

This kind of advanced algorithm-enabled computing at the edge can gather incoming sensor information, bounce it off a vast, seemingly limitless database in real-time to draw comparisons, make identifications, find moments and objects of great relevance, organize and distill the information … and share it across the force. Collecting data can only go so far, especially when it arrives in such volume from so many otherwise disparate sources. AI-enabled computing can take this kind of circumstance and perform critical organizational, analytical, and procedural functions in milliseconds, exponentially faster than any human could.

“Edge computing enables the Freedom Radio, integrated communications, navigation, and target identification systems. This is key to providing our customers with real-time decisionmaking capabilities to address the near pair threat and have that decision and information superiority.” Paukstis said.