The F-35 Can Do It All: Israeli F-35s Took Down Iranian Drones 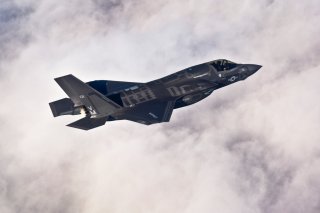 Iran's unmanned aerial vehicles (UAVs) proved no match for the F-35I "Adir," the Israeli variant of the Lockheed Martin Joint Strike Fighter. This week, the Israeli Air Force (IAF) announced that a year ago, F-35I fighter jets had successfully intercepted a pair of UAVs launched towards Israeli territory.

It was the world's first operational UAV interception by the fifth-generation stealth fighter. "In March 2021, the Israeli Air Force intercepted two Iranian UAVs (Unmanned Aerial Vehicles) launched towards Israeli territory. The interceptions were carried out by 'Adir' (F-35I) aircraft against Iranian 'Shahed 197' UAVs that were used to deliver weapons to the Hamas terrorist organization," the IAF said via a statement.

"The IAF's air control units tracked the UAVs, while command and control personnel managed the event from the operational HQ. The double interception was carried out prior to them entering Israeli airspace, while the estimated mission of the UAVs was to transfer weapons to the Gaza Strip and Judea and Samaria region," the IAF added.

The Shahed 171 Simorgh is essentially a full-sized copy of the Lockheed Martin RQ-170 UAV, and is one of two of the Islamic Republic's "flying wing" drones based on the American platform. The Iranian Army's electronic warfare unit had successfully downed a CIA-operated RQ-170 that crossed into its territory in December 2011. U.S. officials acknowledged that the drone had crashed in, or near, Iranian airspace

Iranian engineers studied the crashed RQ-170 and quickly produced a crude copy of the radar-evading drone. At least two were under construction as of late 2014, and Tehran had announced that it would have four in service by March 2015.

The Islamic Republic and its proxies across the Middle East have deployed UAVs to launch attacks, transfer munitions, and arm terrorist operatives. The IAF has warned that Iranian UAV terrorism is a regional phenomenon that occurs on a weekly basis, with Israel being one of many targets.

"These UAVs are used to attack both civilian and military targets alike with the explicit approval of senior leaders in the Iranian regime," the IAF added. "To date, Israel has successfully thwarted all of Iran's UAV terrorism attempts and downed them using fighter aircraft, electronic warfare, and air defense systems."

Tehran has claimed that the Shahed 197 UAV can be armed—a fact that has been disputed by Western analysts—according to Israeli media reports, the drones that were shot down last year were carrying firearms, specifically pistols, destined for terror groups in Gaza.

Last month, Israel announced that it was working with its regional allies to develop a joint defense pact to protect against the threat of drones. Israel has already begun working on the arrangement with regional countries following drone and cruise missile attacks on Saudi Arabia and the United Arab Emirates that have been attributed to Iran's proxies in Yemen and Iraq.