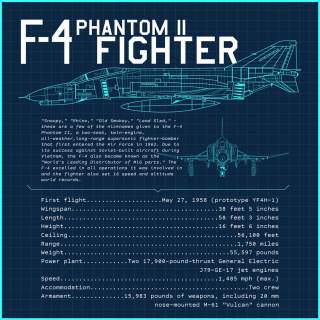 The aerial dogfight was not supposed to happen. On May 20, 1967, eight U.S. Air Force F-4C fighters were patrolling over North Vietnam when they spotted as many as 15 enemy MiG-17 fighters a short distance away.

Fog and the MiGs’ low altitude had prevented the F-4s from detecting the North Vietnamese jets from farther away.

Diving to attack, the twin-engine F-4s fired a staggering 24 Sparrow and Sidewinder missiles, shooting down just four of the single-engine MiGs. The North Vietnamese jets reacted quickly, forming into a tight-turning “wagon wheel,” with each pilot watching the tail of the man in front of him.

As the heavy, twin-engine F-4s tried to out-turn the nimble, single-engine MiGs, a North Vietnamese pilot peppered one of the American planes with cannon fire, igniting it and forcing the two crewmen to eject.

“The turning ability of the MiG-17 is fantastic,” one F-4 flier recalled later. “It must be seen to be believed.”

But the Air Force had assumed that wouldn’t be a problem — that its then-brand-new twin-seat F-4s would never even get into a close-range dogfight. Instead, the F-4s — and other Air Force and Navy fighters — would always destroy their enemies from long range, using the Sparrow and other air-to-air missiles.

It was a flawed and dangerous assumption that got scores of American aviators shot down over Vietnam. But 49 years later, the Air Force is assuming the same thing … with regards to its new F-35 stealth fighter.

In January 2015, the flying branch pitted a radar-evading F-35A against a 25-year-old F-16D in mock air combat. The F-35 proved too slow and sluggish to defeat the F-16 in a turning fight, according to the official test report that War Is Boring obtained.

But the Air Force says not to worry. “The F-35’s technology is designed to engage, shoot and kill its enemy from long distances, not necessarily in visual ‘dogfighting’ situations.”

The Air Force’s faith in long-range aerial warfare proved disastrous in Vietnam. There are good reasons to believe it will prove equally disastrous the first time squadrons of new F-35s fly into battle against a determined foe.

For the first four decades of air-to-air fighting, opposing planes mostly shot at each other with guns. Then in 1946, Navy engineer William Burdette McLean began work on a heat-seeking rocket — the Sidewinder, the first effective air-to-air missile.

Twelve years later, Washington outfitted Taiwanese F-86 fighters with the first combat-ready Sidewinders. In aerial battles over the Taiwan Strait, the F-86s shot down Communist Chinese MiG-17s — and seemingly changed air warfare forever. Soon, new and better missiles — some with radar guidance — were rolling out of laboratories all over the world.

The Air Force and its sister branches enthusiastically embraced the missile age, even dropping guns from many of its new warplane designs, including the early F-4Cs.

American jets of the era were powerful but lacked agility. “Our tactical fighters were designed primarily for nuclear war where penetration was more important than maneuverability,” Air Force Gen. Bruce Holloway wrote in a 1968 issue of Air University Review.

But the next war America fought wasn’t global Armageddon with the Soviets. Instead, U.S. troops joined the South Vietnamese military battling a communist insurgency backed by North Vietnam’s own army and air force.

American military planners had bet on a high-tech war of atoms, electrons, rockets and high Mach numbers during straight-line flights. What they got were slow, twisting dogfights low over the forest canopy. It didn’t take long for the Air Force and Navy to realize their technology and tactics just didn’t work very well against Hanoi’s MiGs.

Between 1965 and 1968, American fighters launched 321 radar-guided missiles over Vietnam. Slightly more than eight percent hit their targets, according to a 2005 analysis by Air Force Lt. Col. Patrick Higby.

The Navy scrambled to analyze the terrible hit rate. “A primary reason for less-than-desired combat performance of air-to-air missile systems in Southeast Asia is their design optimization for a high-altitude engagement against a non-maneuvering, large (bomber) target,” the sailing branch concluded in a 1968 report.

The Pentagon upgraded the Sparrow and Sidewinder missiles and added a gun to the new “E” version of the F-4. Pilots got training for turning fights. Soon, kill-loss ratios improved for U.S. aircrews. But what America really needed was a brand-new fighter — one that didn’t just excel at a narrow sort of high and fast, long-range fighting.

“A tremendously improved thrust-to-weight ratio, which, coupled with a low wing loading, will produce high Mach and ceiling along with superior climb, acceleration and turn ability throughout the flight envelope,” is how Holloway described the new jet’s characteristics in 1968.

“Advanced avionics and armament, which will provide the necessary ability to defeat any foreseen adversary with a wide variety of weapons, including missiles and guns,” Holloway added.

The result was the twin-engine F-15, which debuted in 1972 and 43 years later is still the Air Force’s most numerous air-superiority fighter. The smaller, single-engine F-16 followed a few years later. It, too, could fight high or low, fly fast and turn tight, launch missiles and fire guns.

The F-15 and F-16’s designers didn’t optimize them for fanciful, idealized war scenarios. They optimized them for our own imperfect planning, for uncertain circumstances and for an enemy that gets his own vote — in other words, for the real world.

Which has only become more important as Russian fighter design has progressed. MiG-17s gave way to speedy MiG-21s and, later, highly maneuverable MiG-29s and Su-27s. Today’s Su-35 — a heavily redesigned Su-27—can fly faster and turn better than an F-15 and carries more and arguably better weapons.

Less and less, America gets to dictate the terms in aerial warfare. More and more, the Pentagon needs fighters that can fight.

But America’s new F-35, which is set to become the Air Force’s main warplane, is “substantially inferior” in a turning battle even to an F-15, according to the pilot in the January 2015 mock dogfight. The Air Force insists that’s no problem because the stealthy F-35 will avoid detection and hit enemy planes from long range.

In other words, the Air Force insists it can dictate the terms of the F-35’s engagements.

Maybe that’s partially true. Maybe the F-35’s stealth properties will actually work somewhat. Maybe its missiles won’t miss all the time. Maybe Russia won’t export the Su-35 to every interested buyer. Maybe the United States won’t ever wage a full-scale war against a high-tech foe that can negate the few advantages the F-35 possesses.

But what if the government’s rosy projections turn out to be even slightly off-target? What if something doesn’t work perfectly and F-35 pilots find themselves in dogfights with aerodynamically superior Sukhois or MiGs or Chinese-made planes? What if we send a fighter that can’t turn into battle with fighters that can?

It’s happened before to Air Force fighter jets that weren’t ever supposed to fight close. And a bunch of F-4 crews paid for the government’s blind faith in long-range, straight-line aerial warfare with their freedom … or their lives.