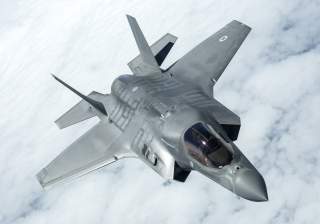 this when such a culture should have been cultivated from the beginning? Or—better yet—the Pentagon could have pursued a less complex, less risky, and less concurrent program from the outset and precluded the need for such machinations now, nearly two decades down the line.

Despite any proclamations from the Pentagon, the F-35 program’s development phase will not be complete in any meaningful sense this year, or for many years to come. The F-35 Deficiency Review Board document reveals that F-35 Joint Program Office officials are not even attempting to deal with serious design flaws, just so they can claim to have finished this phase without busting the budget and the schedule yet again.

Instead, without admitting it, they will complete development work and fixes later, that is, within their newly devised, amorphous “modernization” phase, free of the restrictions and accountability imposed by a budget and milestone baseline.

Congress—instead of exercising its oversight authority to prevent the inevitable cost overruns, performance degradations and safety hazards caused by these bureaucratic machinations—has rewarded the program with unrequested billions of budget add-ons every year for the last three years running.

The men and women who will have to entrust their lives to these planes in combat, and the taxpayers footing the enormous bill, deserve better from their military leaders, their secretary of defense, and their Congress.

Ness Perry contributed to this investigation. This first appeared at the Project on Government Oversight here.