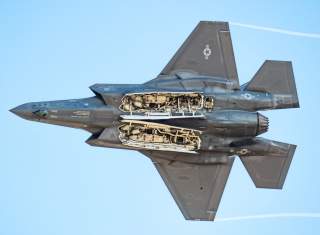 Lockheed hasn’t released details of the design of the Sidekick mechanism.

Lockheed Martin designed a new weapons rack to enable the F-35A and C Lightning IIs to carry two more missiles internally. The new rack is called Sidekick and adds a little extra weight but enables each of the two weapons bays to carry three AIM-120s instead of the current two, for a total of six internally carried AMRAAMs. Sidekick is not compatible with the F-35B, because it features a smaller weapons bay.

“What we’ve done is essentially completed trade studies, design and development” of Sidekick, a Lockheed Martin spokesman explained to Aviation Week. “What is left to be fielded would be things like software integration, weapons separation testing, flight testing and airworthiness testing.”

Lockheed hasn’t released details of the design of the Sidekick mechanism. It’s possible the Sidekick replaces the AIM-120 launch adapter in the high section of the internal bay with a mechanism that can store two of the Raytheon-built, radar-guided missiles in the same space as one now.

The idea of equipping the F-35A and F-35C with a six-missile load-out in the weapons bay has been around for over a decade. Until Lockheed Martin Tony Wilson test pilot comments during a scheduled media briefing, the company hadn’t discussed the idea publicly in several years.

“Lockheed Martin has gone out on its own and developed this capability,” Wilson said. “And now we’ve let the [joint program office] know that it’s out there. It will be over to [business development] and other people to decide how and when it gets implemented. Lockheed Martin stands ready to help the customer implement it when they want it.”

Noteworthy as we have already explained, in stealth mode, the F-35 can infiltrate enemy territory that other fighters can’t, carrying 5,700 pounds of internal ordnance. Once air dominance is established, the F-35 converts to beast mode, carrying up to 22,000 pounds of combined internal and external weapons, to return to the battle to finish the fight.