Is the F-35 Headed For Another Crisis? 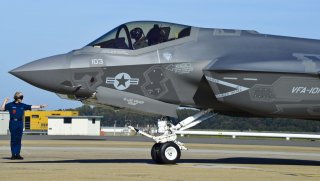 In May, a Military Times investigation revealed that both the number of military aviation mishaps and the number of personnel killed have surged to a six-year high.

An F-35 Joint Strike Fighter was photographed slumped on the tarmac at Eglin Air Force Base on Wednesday after its front nose landing gear “collapsed,” Air Force officials announced. The episode is yet the latest black eye for the ultra-expensive and ultra-defective aircraft.

- The aircraft, an F-35A Lightning II assigned to the 58th Fighter Squadron, experienced a ground mishap at approximately 12:50 p.m. on the flight line at Eglin following an undefined in-flight emergency, the Air Force announced in a statement.

- A photographer from the Northwest Florida Daily News managed to snap a photo of the aircraft:

- “Fire crews responded immediately and the pilot suffered no injuries as a result of the incident,” the Air Force said in a statement. As with most aviation mishaps, An investigation into the circumstances surrounding the incident is underway.

- This is not a good look for the beleaguered F-35 program. A Government Accountability Office audit of the program published in June revealed 966 “open deficiencies” (read: defects) as of this past January, 180 of which will not be resolved before full-rate production.”

- The Pentagon “has made progress in completing the F-35 development program,” the GAO report said, per Bloomberg News. “However, in its rush to cross the finish line, the program has made some decisions that are likely to affect aircraft performance and reliability and maintainability for years to come.”

In May, a Military Times investigation revealed that both the number of military aviation mishaps and the number of personnel killed have surged to a six-year high. This photograph probably won’t help calm the nerves of future F-35 pilots.