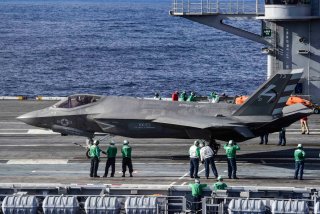 The US. Navy’s F-35C has joined the famous TOPGUN school, marking new territory when it comes to air warfare and helping pilots leverage the various combat attributes unique to the Joint Strike Fighter.

A report from The Drive’s WarZone says the first F-35s recently “touched down at Naval Air Station Fallon, Nevada...  emblazoned with the iconic lightning bolt tail flash and TOPGUN badge.”

The addition of the F-35 is quite significant for a number of reasons when it comes to establishing, refining and improving air combat tactics. The jet is of course engineered to dogfight, yet its sensors, computer automation and targeting technology are reshaping air warfare strategies.

The F-35 is armed with a 25mm cannon as well as a new generation of air-to-air and air-to-ground weapons. One of these weapons, the AIM-9X in particular, brings new attack options to pilots as it operates with an “off boresight” strike capability.

This means an F-35 pilot is able to strike targets behind or to the side of the airplane and is not restricted purely to linear attack. Other F-35 munitions such as the AIM-120D are upgraded with improved range, explosive effects and guidance systems.

These kinds of advantages naturally bring tactical implications as well, given that F-35 pilots can maneuver differently and adapt to enemies in proximity in different ways than may have previously been possible.

For instance, should an enemy fighter be closing in on an F-35 from behind, the pilot will not have to abruptly turn around to engage the enemy but rather have the ability to fire without changing position.

These kinds of tactical dynamics speak to some of the engineering concepts which informed the way F-35s were built. Fundamentally, the aircraft is equipped with sensor, targeting and avionics technologies integrated for the specific purpose of enabling an F-35 to detect, engage and destroy enemy targets before it is targeted itself.

The ability of the aircraft to do this has already been demonstrated in various combat training exercises, verifying that this capability enables the stealth fighter to potentially destroy multiple enemy targets from safer standoff ranges. That is precisely the desired intention for the F-35, a strategic approach designed to enable the aircraft to complete the famous OODA Loop (Observation, Orientation, Decision, Action) decisionmaking cycle.

Now none of this is to say that the F-35 is not built to refine the dogfighting skills for which TOPGUN is famous, yet it does mean pilots training for air-to-air combat will likely train with and refine a new sphere of warfare tactics.