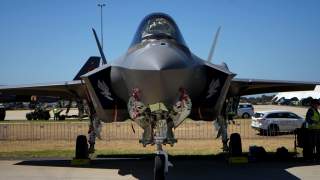 The United Kingdom soon could become the third country after Israel and the United States to fly F-35 Lightning II stealth fighters in combat.

"Britain’s new cutting-edge F-35B aircraft will depart their home station of RAF Marham in Norfolk later this year for Cyprus in their first overseas deployment," the U.K. government on April 8, 2019 announced.

Royal Air Force warplanes fly from two bases for missions targeting Islamic State militants in the Middle East. In the east, RAF fighters and support planes operate from RAF Akrotiri in Cyprus. In the west, another RAF expeditionary group flies from Al Udeid air base in Qatar.

Deploying to Cyprus makes it likely the RAF F-35s will fly combat sorties.

In all, the U.K. air arm plans to acquire 138 F-35s from Lockheed Martin and operate them over the long term alongside a similar number of Eurofighter Typhoons. Besides flying from land bases, RAF F-35Bs starting in late 2019 also will operate from the Royal Navy's two Queen Elizabeth-class aircraft carriers.

While the RAF owns the F-35s, air force and navy crews together fly the planes as part of the U.K. Lightning Force.

"This deployment will allow personnel from both services to gain vital experience in maintaining and flying the aircraft in an unfamiliar environment," the government stated. "The deployment will also train and test all aspects of moving this aircraft to a new location, including logistics, maintenance and sustainment of all the equipment and crew that comes with this impressive aircraft."

Perhaps not coincidentally, the RAF in March 2019 retired its last few Tornado swing-wing attack jets, ending more than 30 years of operations with the type. Tornados based at Akrotiri flew combat missions over the Middle East as late as February 2019. Typhoons now carry many of the same weapons and sensors that the Tornados did. But the Typhoon isn’t stealthy like the F-35 is.

U.S. Marine Corps F-35Bs in September 2018 conducted an air strike in support of what the U.S. Navy described as "ground clearance operations" in Afghanistan. The U.S. Air Force has not yet deployed its own F-35As in combat. The U.S. Navy is still working up its F-35C squadrons for their first front-line cruise aboard an aircraft carrier, currently scheduled for 2021.

F-35s quickly are integrating into ongoing front-line operations. But the stealth fighter still lacks many of its sensors and weapons capabilities. Even the latest Block 4 software, which through 2024 is slowly expanding across the F-35 fleet, unlocks just 80 percent of the stealth fighter's capabilities, U.S. Navy vice admiral Mathias Winter, the F-35 program executive officer, said in a December 2018 interview.

Still, it's noteworthy that the RAF plans to deploy its F-35s for land-based operations apparently before it plans to embark them on the Royal Navy's carriers. “This first overseas deployment of these world-beating British F-35B aircraft to RAF Akrotiri, together with their embarkation in HMS Queen Elizabeth for the first time in the autumn of this year, are important milestones to prove their readiness for deployed operations anywhere in the world in defense of our national interests,” stated Adm. Sir Philip Jones the U.K. First Sea Lord.

"These formidable fighters are a national statement of our intent to protect ourselves and our allies from intensifying threats across the world," Defense Secretary Gavin Williamson stated. "This deployment marks an important milestone in this game-changing aircraft’s journey to becoming fully operational."