The F-35 Is More 'Flying Computer' Than Fighter Jet, And That's Changing How America Fights 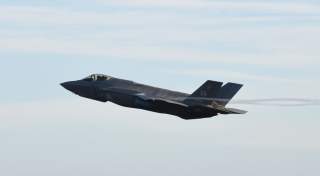 Key point: ​In terms of weapons, Block IV will eventually enable the F-35 to fire cutting edge weapons systems such as the Small Diameter Bomb II and GBU-54 – both air dropped bombs able to destroy targets on the move.

The Pentagon's F-35 is conducting attacks, surveillance operations and combat missions with an updated on-board “threat library” of Mission Data Files engineered to identify enemy threats in key regions around the globe.

“The AORs (Areas of Responsibility) for current operations where our forces are -- currently have adequate Mission Data Files,” Vice Adm. Mat Winter, Program Executive Officer for the F-35 program, told a group of reporters.

The threat warnings generated by the F-35s Mission Data Files are designed to integrate with other on-board electronics such as targeting sensors, Much of this draws upon computer algorithms increasingly supported by AI, Winter said.

While many developers cite significant challenges when it comes to software development and integration for the F-35, the fighter is widely regarded as a “flying computer.” The “fusion” or technical integration on board the aircraft is engineered to access and leverage a wide range of data points and condense them for the pilot. In essence, surveillance, computer processing and targeting data are fused, as opposed to being stovepiped or separate sources. As a result, the technology also incorporates Identification Friend Foe (IFF) surveillance systems designed to quickly distinguish friendly from enemy aircraft.

The new hardware and software technology, to be operational on the F-35 by 2021, includes seven racks per aircraft consisting of 1,500 module components, including new antennas and weapons release systems.

Some of the components include an Advanced Memory System (AMS) engineered to improve data storage and generate higher resolution imagery to help pilots with navigational and targeting information.

The data processing increase is exponential, developers explain, as it enable measurements to take place in terabytes instead of megabits or megabytes.

The upgrades include a portable memory device which can quickly be transferred from a ground station to the F-35 cockpit.

The Air Force is already working on a 4th drop to be ready by 2020 or 2021. Following this initial drop, the aircraft will incorporate new software drops in two year increments in order to stay ahead of the threat. The service is also working to massively quicken the pace of software upgrades as a way to respond quickly to new threats.