The F-35 Is Powerful, But It Doesn't Matter If It Can't Reach Its Target 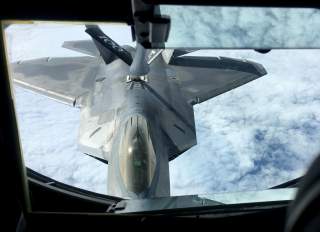 Key point: The tankers needed to refuel the F-35 are large and vulnerable.

In part 1, I examined the hard limits on the F-35A’s unrefuelled range. Air-to-air refuelling can certainly help extend it.

Tankers can substantially increase fighters’ time on station (that is, how long they can stay out). But they can’t extend the jets’ combat range indefinitely. There are several reasons for this. The first is that generally pilots want to have enough fuel on board to get home alone, just in case the tanker they were planning to refuel from isn’t there (due to mechanical problems, being shot down or driven off station by enemy aircraft, or just running dry).

In a region like the Middle East, this risk can be mitigated by having fallback airfields to divert to in an emergency, but in the Pacific (and indeed in Australia itself) there are very few fallback options, particularly ones that you can safely land a conventional fighter on.

That means once an F-35A flies out roughly 1,000 kilometres, it needs to tank before it can go any further. But that load of fuel only allows it to go a further 500 km because at that point it will still need to have 1,500 km of fuel reserves on board to get home. And that doesn’t give any time on station or give it fuel to fight. So, it would need to tank again to stay on station. But, theoretically, a combat range of around 1,500 km is achievable. That would look something like the red ring in Figure 1.

I’ve included only one ring, and that’s because of the second reason that tankers can’t extend a fighter’s range indefinitely—air-to-air refuelling to keep fighters on station is very resource intensive.

If a commander wanted to keep F-35As on station around 1,500 km out from mainland airbases (potentially protecting an amphibious task force, a lodged land force, or a naval task force patrolling choke points), planners would likely need to set up two refuelling circuits—one to enable the fighters to reach their station, and then one a few hundred kilometres behind the fighters’ station so they can pull back, refuel and return to station with fuel to fight.

In that scenario, keeping just two F-35As on station would take at least eight F-35As in the air at one time around the clock (two heading out, four cycling between their station and the refueller, and two heading home). Each of them would need to fly an eight-hour mission, potentially tanking four or five times. Taking aircraft maintenance and unserviceability into account (which will increase as the operation continues), that would potentially require at least 12 to 16 aircraft to sustain. But since pilots can fly that mission only once per day, the cycle needs a minimum of 24 pilots (and more to account for ‘unserviceability’ of pilots as the operation grinds into the future).

But more is needed. The whole concept of a fifth-generation air force relies on superior situational awareness, so to fully exploit the F-35A’s capabilities the package would need to include an E-7A Wedgetail early warning and control aircraft flying a circuit a hundred kilometres or so behind the fighters to detect enemy aircraft. The RAAF has six, and fewer than that will be available for operations, and fewer again serviceable for missions. Therefore, sustaining that one combat air patrol will likely require all the Wedgetails. Keeping them on station will likely draw on some of the tankers’ fuel.

But the biggest stressor on the viability of the mission is tanker capacity. The air force now has seven KC-30A air-to-air refuellers after recently acquiring an additional two. It’s hard to see more than five being available, and fewer will be serviceable on any given day. One tanker, engaged in continuously refuelling fighters on the combat air patrol, can’t stay on station for more than four to six hours before needing to refuel.

Sustaining two refuelling stations (one to get the fighters out to the patrol area and one to sustain them on station) with a force of only four or five tankers would likely exceed any responsible commander’s risk tolerance by creating a single catastrophic point of failure. One unserviceable tanker, accident or combat loss would cause the entire cycle to collapse, potentially with pilots and aircraft unable to make it home.

Keeping the fuel flowing to the tankers would also be challenging. Even exercises such as Pitch Black have taxed fuel supplies at permanent bases. The kind of scenario outlined here would require well in excess of 500 tonnes of fuel per day (visualise around 20 semi-trailers, or over the course of a month something roughly commensurate with the Northern Territory’s total average monthly aviation fuel consumption). Getting that reliably to remote bare bases such as RAAF Scherger on Cape York would be a demanding task, although the challenge could be mitigated by flying the tankers out of permanent air bases.

A 1,500 km sustained presence over a hypothetical task force in the Bismarck Sea would look something like the smaller of the two rings in Figure 2. That would consume all of the RAAF’s enabling capabilities. It’s possible that enough fighter pilots and jets would be left over to conduct air defence of one other location (indicated here by the ring based on Darwin), but they’d be doing it without early warning aircraft or tankers.

Pulling the patrol back into 1,000 km would destress the cycle, potentially by allowing the commander to manage with just one air-to-air refuelling circuit, thereby requiring fewer KC-30As. But that gets us back to our starting point—air-to-air refuelling doesn’t help that much with increasing the F-35A’s combat range.

Would more of the same help? The short answer is, it can’t extend range much beyond 1,500 km as that limit derives from the nature of the F-35A. But more enablers would make the system robust. Andrew Davies recently gave a concise list of what these would be, ranging from greater fuel storage to tankers.

People are key—not just pilots, but also maintainers, ordnance handlers, and air combat officers in the back of Wedgetails, to name a few essential categories—but all will be taxed in a scenario of sustained operations. Even mundane things like concrete hard stands would be in high demand, because the limited space of the bare bases would quickly be overwhelmed. In short, the F-35As themselves are just the tip of the iceberg.

If the enemy has long-range standoff strike weapons or special forces that can destroy fuel farms, that’s another point of failure, as is a strike that craters the runway and shuts down operations. A favourite special forces tactic in exercises is to sneak in at night and ‘kill’ all the pilots. So ‘more of the same’ would also need to include defensive capabilities such as ground-based air defence missiles, air defence guards, and maybe even a combat air patrol over the base itself (requiring more F-35As, more pilots and more fuel).

More fighters could allow the RAAF to operate simultaneously from multiple airbases, partially mitigating the risk posed by an enemy strike on any individual base, but those bases would also need the rest of the logistics chain.

With the sticker price just for tankers around $300 million each, building robustness is a very expensive proposition.

In part 3 of this series, we’ll look at what this means for operations.