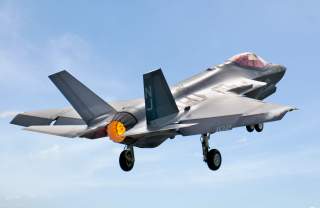 Increasingly, software ranging from operating systems to word processors and computer games, is being sold as a subscription service, rather than a one-time purchase. On the upside, that can mean ongoing updates, expanded functionality, and bug and security fixes. On the downside, not only are those continual updates continually paid for, but software is increasingly sold lacking vital features and Q&A testing—flaws only corrected using the dollars and testing feedback of early adopters.

Such an approach also applies to the Lockheed F-35 Lightning II stealth fighter, which at a projected $1.5 trillion lifetime cost, is the most expensive weapons program in human history.

Meanwhile, the Pentagon is planning a major patch for F-35 software and hardware called Block 4 that will add or fix fifty-three capabilities—including nine capabilities planned to be in Block IIIF, but which were deferred due to implementation challenges. These include major performance upgrades and new weapons integration, as well as bug fixes and minor performance improvements.

And because this is the F-35 we’re talking about it, it’s also the most expensive patch ever. An earlier GAO cost estimate of $3.9 billion for Block 4 implementation was revealed to have quadrupled to $16 billion in hearing in March 2018: $10.8 billion for development and testing, and $5.4 billion for procurement of the upgrades. And according to an analysis on Defense-Aerospace, even $16 billion is likely inadequate.

Meanwhile, though the Pentagon has begun outlaying hundreds of millions of dollars in contracts for Block 4 development, it doesn’t have the funding to pay for it all—even though foreign F-35 partners are on the hook to pay $3.7 billion in development costs, whether or not they procure Block 4.

The programs costs several times exceed the threshold for designation as a “Major Defense Acquisition Program,” leading the Government Accountability Office recommended that Block 4 be peeled off into a separate MDAP. However, the F-35’s Joint Program Office objected, not wanting to disrupt its management of the F-35. A Congressional vote in 2017 affirmed the JPO’s position.

Block 4, which also goes by the name Continuous Capability Development and Delivery (C2D2), will take place in four six-month phases numbered 4.1 through 4.4 with some development occurring concurrently—an approach which has caused problems in the F-35. For example, many software upgrades are predicated on hardware that is itself still under development, meaning integration difficulties are likely to impose delays.

The Defense Department hopes that Block 4 will set the stage for “agile” (as in frequent, responsive and rapid) updates to the F-35’s mission computer without need for an extensive testing process. This could be particularly useful for incorporating intelligence on new aircraft or surface-to-air missile systems to the F-35’s onboard threat library.

However, while Block 4 is described as being 80 percent software upgrades, the 4.2 and 4.4 phases will include major new bits of hardware.

Lockheed has not released the exact schedule and scope for the four phases of Block 4, claiming that is proprietary information. However, publicly released materials and articles allow many of the key features to be identified.

Block 4.1 software upgrades intend to substantially “unlock” the capabilities of the F-35’s sensors and communication systems. The Lightning’s stealthy tight-beam Multifunction Advanced Datalink (MADL) will be made compatible with widely used Link 16 datalinks and even satellite communication, significantly expanding the number of friendly assets it can network with. It will also gain the ability to stream video to friendly forces on the ground using Rover-NG systems.

Improved sensors and datalinks will synergize with software upgrades integrating new weapons including the Small Diameter Bomb II, the JSOW-C, AIM-9X Block II launch lock-on-after-launch air-to-air missile, and the B-61 nuclear bomb. These new armaments, as well as weapons integrated for European F-35 operators, are detailed in a companion article.

In 2019, the F-35’s computer is set to receive an Automatic Ground Collision Avoidance System that detects when an F-35 is headed for a face plant, and automatically maneuvers the plane to avert one. Implementation of a GCAS on the F-16 reportedly prevented six crashes between 2014-2018, and is estimated to prevent around 26 accidents on the F-35 across its service life.

As for the ALIS logistics system, pervasive functionality problems and cyber-security vulnerabilities have led the Pentagon to debut a major re-design effort called ALIS-Next.

Block 4.2 in particular will implement “Tech Refresh 3.” As if the F-35 were receiving a brand-new gaming computer, it involves installing new core processors, faster solid-state video memory, and 4k high-resolution cockpit displays that should improve navigation and targeting, and make it easier to distinguished obscured targets.

The F-35’s fifteen-year old Electro-Optical Targeting System (EOTS), which has been surpassed by newer sensor pods, will also be replaced. Features of the new Advanced EOTS, which is designed to fit in the same low-observable configuration, include short-wave infrared sensors, high-definition television, an infrared marker, and superior image detection resolution.

Meanwhile, BAE Systems is reportedly testing an improved variant of its ASQ-239 electronic warfare suite, which combines a 360 degree electromagnetic sensor to detect nearby threats with infrared and radar countermeasures designed not to interfere with the F-35’s own sensors.

The Block 4 F-35 may also receive upgraded engines, though these could also be deferred to a later Block. In 2018, engine manufacturer Pratt & Whitney proposed either an improved F135 turbofan with thrust tweaked upward by 10 percent and fuel efficiency by 5 percent; or a more radical adaptive-cycle engine that can re-optimize itself inflight for different performance regimes. Either might significantly increase the F-35’s troublesomely short range. Pratt & Whitney received $230 million to test a new engine in 2019, though which option is preferred remains unclear.

An engine upgrade may also involve superior power and thermal management technology and possibly greater electricity generation, allowing additional systems integration on the F-35 that could eventually enable directed-energy weapons such as lasers.

The Block 4 upgrade is supposed to conclude by 2023, but reportedly inadequate funding places a question mark on whether it can be implemented on schedule. Both the GAO and the Pentagon’s Department of Testing & Evaluation have questioned the aggressive schedule, one 2017 report characterizing it as “not executable’ with available resources. A 2018 report describes the Block 4 program as “high risk,” warning the Pentagon ‘needs to ensure adequate funding’ to achieve the four planned six-month increments, noting that similar earlier programs typically took two-to-three years to accomplish.