F-35 Is So 2001: France and Germany Want Their Own 6th Generation Stealth Fighter 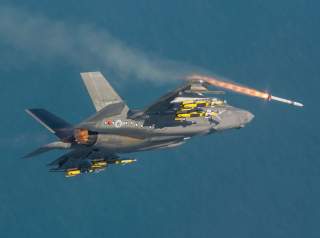 On June 17, 2019, French President Emmanuelle Macron took his place on a stand at Paris-Le Bourget airport overlooking an aircraft shrouded in a silvery gray tarp. Standing with him were the defense ministers of Spain (Margarita Robles), France (Florence Parly), Germany (Ursula van der Leyen), and the CEOs of the French Dassault aerospace company and the pan-European Airbus corporation.

At the appointed moment, the tarp swept away to reveal a full-scale mockup of a sleek twin engine jet that is eventually become Europe’s first indigenously designed stealth fighter. Lacking any speculatively detailed avionics, the featureless mockup looked like it might have rolled out of a 1990s-era videogame.

France and Germany first officially launched the Future Combat Air System program in April 2018 and Spain jumped onboard in February 2019. Meanwhile, the UK debuted its own sixth-generation Tempest program in July 2018, with a partnership with Italian firm Leonardo. Both projects are competing for European partners, though it’s not inconceivable they may also be hoping to merge their efforts into a joint project.

It wouldn’t be a stealth fighter program if there weren’t accompanied by a confusing hash of blandly generic acronyms. FCAS (or SCAF in French) is technically a “system of systems,” of which the “New Generation Fighter (NGF) is specifically the manned aircraft component. The other two identified components includes a family of at least three different types of “Remote Carrier” drones, and an Air Combat Cloud network tying the drones, NGF and support assets together.

There are some new insights to be gleaned from the NGF mockup. Earlier NGF concept art revealed a tailless design, but the mockup now sport a canted V-shaped tail reminiscent of the Northrop YF-23 Blackwidow.

Tony Osborne told Aviation Week the mockup is reportedly fifteen meters long, and 25-33 percent larger than France’s Rafale twin-engine fighters. Furthermore, the jet will supposedly have a maximum takeoff weight similar to seventy-four thousand pounds of long-retired Mirage IV jet bomber. Taken together, these hint that NGF will be designed to carry heavy fuel and weapon loads, the latter most likely in stealthy internal bays.

Regarding the airframe, former British technical liaison Jim Smith notes that “significant trades have been made with an intent to minimize [radar] signature, at least in the forward and side-on aspects,” and that it “does not seem to be designed with high manoeuvrability in mind.”

The FCAS has long envisioned the NGF teaming up with drones, and at least three different types of Remote Carrier mockups were on display at Le Bourget: RC100 and RC200 medium and heavy drones, and a large drone with X-shaped tail stabilizers developed by Airbus.

The drones are intended to support the stealth fighter by serving as sensor platforms, decoys from enemy attacks, and airborne jammers. The drones can either be launched from NGF itself, or separately deployed by a ship or launched from an Airbus A400M transport plane to free up the NGF’s payload and performance.

The drones themselves are described as “stealthy,” designed to fuse infrared and radar sensor data with friendly forces, and as featuring advanced artificial intelligence to help identify targets and assist pilots in rapid decisionmaking during intense combat situations.

The FCAS team staged a conceptual demo showing how NGFs networked with Remote Carriers, A400M transports, frigates at sea and A330 MRTT refueling tankers/command planes working together to destroy a “strongly defended enemy airbase,” deploying optically-guided bombs from fifty to one hundred miles away that are capable of reassigning targets mid-flight in response to the evolving combat scenario.

Engine manufacturers Safran and MTU, meanwhile, are collaborating on the “Next European Fighter Engine” to produce 30,000 pounds of thrust and sustain temperatures of 2,100 degrees Celsius without damaging themselves. The NGF mockup reveals divertless supersonic intakes designed to minimize radar cross section—similar to those on the F-35.

Smith opines the intakes suggests “speed may be limited to Mach 1.6,” which happens to be the F-35’s maximum speed.

The new engines are likely to be a variable-cycle turbofans that can switch midflight between high-bypass mode for superior subsonic performance, and a low-bypass configuration enabling better fuel economy at supersonic speeds. Supposedly, they will also be hybridized for electricity generation, which could help power advanced avionics or directed energy weapons.

MTU will develop the compressors and low-pressure turbine, while Safran will design the combustor, afterburner, and high-pressure turbine. Safran also is apparently working on thrust-vectoring engine which could conceivably be fitted on the NGF to enhance maneuverability, as is the case with the F-22 Raptor’s F-119s turbofans.

Countries like Japan, the United Kingdom and United States that already operate strike-oriented F-35 Lightning stealth jets are interested in sixth-generation fighters with a stronger air superiority emphasis. However, France and Germany do not plan to purchase F-35s, and the FCAS seems to reflect an interest a balanced multirole fighter suitable both for air-to-air and deep penetration missions, while boasting the F-35’s emphasis on networked warfare.

France will also expect the NGF to be adapted into a versatile naval fighter for its catapult-equipped aircraft carrier; effective as a stealthy nuclear delivery system for its air-launched nuclear missiles; and capable of expeditionary deployment to rough African airbases when necessary.

It’s important to keep in mind that FCAS and NGF remain strictly in the conceptual phase, and sums spent so far have been modest. In January 2019, $65 million euros were allocated to help Dassault and Airbus arrive at a ‘joint concept’.

However, this will likely soon change, as France, Germany and Spain are planning to allocate $4.5 billion to the aircraft’s development phase later in 2019. This should result in a flying prototype by 2026, using the same M88 turbofans from the Rafale while the NEFE engine continues development.

The NGF is planned to enter operational service around 2040, gradually replacing German Typhoon jets, French Rafales and Spanish Super Hornets. Total program costs including procurement and sustainment, however, could well exceed $100 billion euros according to an estimated cited by the Washington Post.