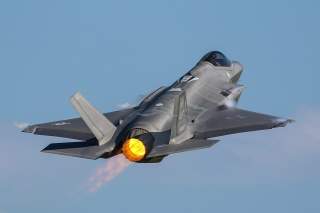 Lockheed Martin and the Pentagon are fighting over intellectual property (IP). If they can’t resolve their dispute, it could result in delays to critical elements of the F-35 program. What’s going on, and how can we solve it?

As Bill Carey writes, the dispute concerns the ownership of certain software associated with simulating the flight systems of the F-35. The Joint Simulation Environment software/hardware package allows the Pentagon to create an artificial world that enables testing of various aspects of the F-35 in large-scale scenarios. This requires flight data from the F-35, which then feeds back into decisions about procurement, sustainment, and production.

In Aviation Week, Steve Trimble, Lee Hudson and Michael Bruno describe the problem as one of ownership and contracting. LockMart claims to have developed the algorithms designed to sort and manage flight data on its own, independent of federal funding. The government claims that the algorithms were produced as part of a government contract. Given that the data and the algorithms that massage the data are important to long-term production and sustainment of the F-35, this matters a great deal to both parties. LockMart has lost the first ruling, and is awaiting the result of an additional appeal.

Obviously, money is involved. Control of the algorithms would presumably give LockMart a long-term revenue stream, and would also retain a degree of company control over the program. The impact on the production and deployment of actual aircraft is somewhat less clear, as both LockMart and the Pentagon have disputed the idea that the disagreement has produced delays.

The problem lies with how the United States does business with its defense industrial base. While most nations have established some kind of public-private partnership for designing and producing military equipment, the United States lays at the far end of the spectrum with respect to its focus on private industry. On the upside this should tend to increase innovation, although industry consolidation may undercut some of those gains. On the downside this arrangement builds an antagonistic relationship into the core of the military-industrial complex, as private industry seeks profits at the expense of the public and the public (in the form of the Department of Defense) attempts to limit industry profit.

IP is only one facet of this, but it’s an important one. Some (Katherine Epstein, for example) argue that IP has stood at the core of the national security enterprise since the turn of the twentieth century, at which point private enterprise lost the capacity to fund its own innovation and instead needed to rely on government research money. The importance of careful IP contracting has increased as the big defense companies have primarily become systems integrators, coordinating contracts with dozens (or hundreds) of contractors and subcontractors each of whom have their own IP interests.

From a contracting point of view, the Pentagon has long taken an aggressive stance towards data ownership. Generally speaking, DoD seeks to control IP in order to reduce the leverage that particular companies have over procurement. As summarized by Jim Hasik, the issues involve repair, modification, and system re-buys. The developer (in this case LockMart) enjoys some aspects of a monopoly position, but one mediated by the fact that it faces only one buyer (monopsony conditions). For its part, The government wants as much of the IP as possible in order to ensure that it still has access to equipment and data after the developer decides to discontinue production or sustainment.

As Trimble, Hudson, and Bruno note, the Pentagon has begun a systemwide review of IP policies based on initial steps taken by the Army, which has devoted considerable attention to revising and updating its contracting strategy. This includes contracting reform, clarifications of practice on IP, and assurances to all partners of transparency. Most importantly, it focuses on acquiring rights to the relevant IP up front, thus avoiding lingering disputes like this. However, the new IP policy hasn’t been particularly popular with industry, which has increasingly viewed maintenance of IP rights as a core concern.

One of the unexpected results of the Trump administration has been the emergence of intellectual property concerns from the shadows of contracting and law offices onto the global stage. The dispute between LockMart and the Pentagon hasn’t quite risen to a strategic concern just yet, but the increasing importance of IP, combined with the nature of the U.S. defense industrial base, makes it imperative that the Pentagon and industry settle on a mutually agreeable set of policies for the future.

Robert Farley, a frequent contributor to The National Interest, is author of The Battleship Book. He serves as a Senior Lecturer at the Patterson School of Diplomacy and International Commerce at the University of Kentucky. His work includes military doctrine, national security, and maritime affairs. He blogs at Lawyers, Guns and Money and Information Dissemination and The Diplomat.