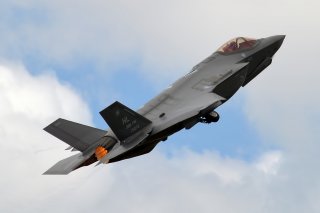 On the one hand, the F-35 Lightning II Joint Strike Fighter is the arguably the most lethal and versatile aircraft of the modern era. Three unique variants have been produced so that the aircraft can fit the needs of the U.S. Air Force, U.S. Navy and United States Marine Corps. It is an agile aircraft that has radar-jamming abilities, supersonic speed and stealth capabilities. It has been widely adopted by American allies and partners and could remain in service well into the 2070s.

On the other hand it is the most expensive military platform to date and by the end of the program could cost $1.5 trillion dollars. To put that in perspective, as of August 31, the federal debt held by the public was $20.83 trillion.

From another perspective, that $1.5 trillion figure would be for the life of the aircraft, which is expected to be from now until the 2070s and could account for 3,000 or more aircraft.

Last month, Congress took another look at the costs of the F-35 during an oversight and accountability hearing, and in the spotlight was the Joint Strike Fighter's logistical IT system. According to DefenseNews, the Department of Defense (DoD) Office of the Inspector General had reported earlier this year that millions of additional dollars were spent in the form of labor hours by military personnel to manually track the plane's spare parts as the electronic logistical one continued to have problems.

Software upgrades could be on the way.

Earlier this month it was announced that the Tech Refresh 3 program for the fifth-generation stealth fighter will include an upgrade of the jet's core processor and memory as well as replacement of its Panoramic Cockpit Display. Other “improvements” will include a radar upgrade along with some hardware tweaks to the hardware for the weapons-handling.

As Steven P. Bucci, visiting fellow at the Heritage Foundation, noted in his story for Defense News, the DoD has been able to leverage its buying power and that has driven down the cost of each F-35A to around $80 million a full year earlier than planned. That means the fifth-generation F-35 now costs less than the F-15EX, a less capable but still significantly updated fourth-generation aircraft, which costs around $88 million each.

Moreover, the aircraft’s maker, Lockheed Martin, has also done its part to bring the sustainability cost per flying hour down by some 40 percent—meaning that the F-35 costs less to fly per hour, which is notable as the hours flown each year are set to increase.

Yet, it isn't all good news for the F-35 and Lockheed Martin. Last month the UK announced that it could reduce its order of the advanced stealth aircraft by half. The aircraft has also become a sticking point in the Middle East peace process as Israel has expressed concerns over the United Arab Emirates plans to acquire the F-35.