The F-35 Is A Success Story That Keeps Getting Better 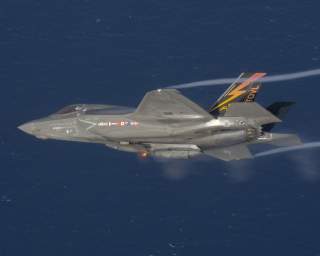 There is an old saying in the news business to the effect that bad news gets more attention than good news. There is some truth to this observation with respect to Pentagon acquisition programs. While it is important to inform the public about problems in military programs, focusing on challenges, rather than giving attention to successes, can give the impression that a platform or system is not performing well, and thus not providing value for money.

The F-35 Joint Strike Fighter (JSF) program is a case in point of this phenomenon. Press reports on the JSF program have been dominated by stories on high maintenance and sustainment, and problems with the supply chain. While none of these concerns are insignificant, what has not been made clear is how much progress the program has made on multiple fronts, including on lowering those costs and the contribution that the JSF is already making to U.S. national security, as well as that of allies and partners.

The purchase price of the F-35 has also been declining for years. Recently, the Pentagon signed an agreement for three production lots, a total of 478 aircraft, allowing the industry team to control costs by buying in economic quantities, and improving workflow management. As a result, the benchmark price for the F-35A, the Air Force’s variant of the JSF, will decline to $78 million per copy earlier than planned. The Pentagon had a goal of an average price for the F-35A that was higher: $80 million per copy.

For a price that continues to decline, the United States and its allies are buying the world’s premier stealth fighter. At the U.S. Air Force’s 2017 Red Flag exercises, an early configuration of F-35s reportedly achieved a kill ratio against aggressors as high as twenty to one. At the 2019 Red Flag, F-35s equipped with the latest software upgrade were equally successful in engagements against vastly superior numbers of fourth-generation aircraft.

Some commentators have asserted that the F-35 is deficient because it cannot engage in close aerial combat in what is called “dogfighting,” or against certain fourth generation aircraft. This also turns out not to be true. A combination of improved software and greater pilot experience with the JSF has resulted in the aircraft being able to outperform older platforms. Testimonies of pilots flying the F-35 have stressed that with its superior capabilities, the JSF can win an air-to-air battle without having to dogfight, and that its maneuverability gives it an added advantage in close combat.

Efforts are under way to exploit the power of the F-35 as a forward-deployed sensor platform in support of the Joint Force. Even before the F-35 was declared operational, the military was exploring its employment in support of both missile-defense operations and long-range strikes. In 2016, the U.S. Navy successfully demonstrated that the F-35 could serve as a forward-deployed sensor for the Aegis Ballistic Missile Defense System. More recently, The Army and Air Force demonstrated that the F-35A could direct the fire of its long-range artillery.

The JSF program continues to expand the platform’s capabilities. The F-35 became operational with the ability to operate a deadly, but limited, array of weapons, including the Paveway IV, GBU-12 and GBU-49 laser guided bombs. The introduction of the advanced Block 4 software suite will add the Advanced Short Range Air-to-Air Missile, the Joint Strike Missile, the Advanced Anti-Radiation Guided Missile, the GBU-53 Small Diameter Bomb and the GBU-54 Laser Joint Direct Attack Munition to this arsenal. Another capability to be added soon is an improved weapons rack, which will allow F-35s to carry two additional missiles or bombs internally. Lockheed Martin is also looking at developing a conformal external fuel tank that would add about 40 percent to the aircraft’s range.

An issue that has received a great deal of public attention is the cost of sustaining the F-35. Because some 70 percent of a program’s total costs occur after the platform or system has been procured, managing sustainment costs is extremely important.

What has not received sufficient attention is the intensive efforts the JSF Joint Program Office and the team involved in producing the F-35, particularly Lockheed Martin and engine maker Pratt & Whitney, are doing to reduce these costs and improve the availability of spare parts. More than a year ago, Lockheed Martin restructured a number of its contracts with key suppliers, providing them with predictability and stability in return for reduced prices. As a result of a sustained effort on all of these fronts, mission capable rates for all variants of the F-35 have improved substantially over the past year.

Lockheed Martin has proposed an innovative approach to reducing flying hour costs. The company has offered to enter into a Performance-Based Logistics (PBL) contract with the Department of Defense. Under a PBL contract, Lockheed Martin guarantees a specific level of aircraft availability for a fixed price, and any additional costs would be borne by the company. The goal is to achieve a cost per flying hour of $25,000 by 2025. According to the company’s estimate, such an approach could reduce the total ownership cost for the overall U.S. F-35 fleet by $18 billion dollars over the next fifteen years, or about $1 billion per year.

Without question, the JSF program continues to face challenges. But it is also making enormous progress. The program is delivering aircraft, expanding capabilities and reducing costs. Overall, the F-35 is a success story that keeps getting better.