F-35: The Ultimate Guide to World's Most Powerful Fighter 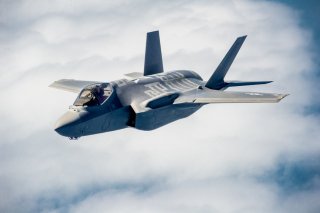 Without peer at home and abroad, the F-35A fifth-generation stealth fighter is a bold assertion of American airpower in an increasingly unstable world.

The fighter that became Lockheed Martin’s F-35 Lightning II had its early roots in the Joint Strike Fighter (JSF) program, a sweeping procurement effort intended to eventually phase out not only the aging F-16 Fighting Falcon but also the F/A-18 Hornet and F-117 Nighthawk.

Lockheed Martin was declared the winner of the general competition following the introduction of its X-35 prototypes. These prototypes were further tweaked in the early 2000s, with subtle but consequential changes to the stabilizers and fuselage, and re-designated as the F-35. Contrary to popular conception, the F-35 is actually a family of three closely related but fundamentally distinct fighters. The F-35A is the conventional take-off and landing (CTOL) variant that is being procured by the U.S. Air Force (USAF). The F-35B is a short takeoff and vertical landing (STOVL) variant meant to replace the Marine Corps’ fleet of Hornet fighters as they approach their projected sundown date of 2030. Finally, the F-35C is a catapult-assisted take-off but arrested recovery variant that is designed to operate from aircraft carriers as part of U.S. Carrier Strike Groups (CSGs).

USAF’s F-35A will be by far the most numerous of the three variants, as the Air Force plans to procure up to 1,763 such units through 2044. With 283 models currently in service, the F-35A is being serially produced at a remarkable pace. The Lightning II is already USAF’s second-most numerous fighter after the F-16. As more and more Fighting Falcons are phased out in coming years, it is only a matter of time until the F-35 becomes the Air Force’s most widely-owned fighter.

What Makes the F-35 a Beast

The F-35 is a fifth-generation, single-engine stealth multirole fighter, intended to perform both air superiority and strike missions. But the plane’s true operational versatility lies in its ability to seamlessly switch between configurations to match the threat level presented by the enemy’s air assets and defenses. The F-35 carries four AIM-120 AMRAAM missiles for air-to-air missions, or four AIM-120’s/GBU-31 JDAM “smart bombs” for air-to-ground missions, in its internal weapons bays. Lockheed Martin’s upcoming “Sidekick'' weapon rack, featured on Block IV F-35s, will allow the fighter to carry two additional AIM-120s for a total of six. This is the F-35A’s stealth loadout, one that minimizes its radar-cross section (which is believed to be comparable to that of a metal golf ball from the front) to allow for maximum stealth penetration potential in highly saturated “first day of war” environments when the enemy’s anti-air systems are still operating at full capacity.

As the enemy’s airspace is progressively compromised through the ongoing degradation of hostile air defenses, the conflict enters into its “third day of war.” No longer under heightened threat, F-35 squadrons now have the option of sacrificing stealth performance to unleash their full payload capacity— consisting of over a dozen AIM-120 missiles, or six guided bombs and four more air-to-air missiles stored in internal and external bays— in a configuration previously referred to as “beast mode.”

But raw offensive capabilities are only one part of what makes the F-35 one of the most sophisticated air power platforms of its time. With its vast suite of onboard sensors and powerful data processing software, the fighter can generate a dynamic picture of the battlefield and feed a portion of this information to nearby friendly units, playing what F-35 demonstration pilot Capt. Andrew “Dojo” Olson aptly called a “quarterback” in the sky. “When we go out there we’ve got tons of gas, we can hang out for a long time and we can paint the battlespace for everybody and share that situational awareness with our fourth-gen brothers and sisters and be a more effective fighting force,” Olson added. Dubbed “sensor fusion,” this advanced capability allows the F-35 to serve as a force multiplier for the rest of the fleet, providing older fourth-generation fighters with what one pilot described as a “god’s eye view” of the battlefield.

Like most ambitious and ultimately successful military hardware programs, the F-35 was not without financial and technical growing pains. The program’s most ardent critics frequently, and all too often unfairly, seized upon this fact to indict the project as a whole. But the long-term trends are unmistakable: Lockheed Martin has worked hard to chip away at the F-35A’s flyaway cost with every subsequent production lot, with the fighter now sitting at somewhere around $77.5 million according to the latest estimates. This makes the F-35 cheaper than many staple U.S. fourth-generation fighters, as well as notable foreign offerings like the Eurofighter Typhoon. Sustainment costs, too, have steadily declined, with the manufacturer stressing that they remain committed to further logistics, repair, and supply chain optimizations in coming years and decades. As noted by my colleague Kris Osborn, debates over the F-35’s cost have also largely omitted the very real costs of survivability: everything else being equal, the F-35 is significantly less risky to operate than competing fighters like the F-15EX and thus less likely to be lost in sorties.

The F-35A is one of the most advanced airpower platforms ever to be mass-produced. With its class-leading versatility and unique networking capabilities, it is arguably the most potent tool available to the Air Force today; as far as U.S. adversaries are concerned, it is also among the most fearsome. As the world descends into an age of renewed great-power competition, it is more necessary than ever to invest in such forward-looking platforms as the F-35 to keep the rapidly growing capabilities of Washington’s Russian and Chinese competitors in check.