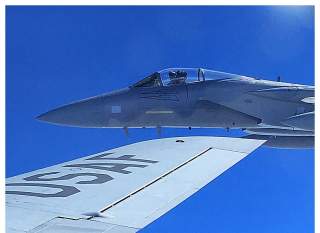 A subcommittee of the House Armed Services Committee wants to limit the Air Force’s 2020 purchase of F-15EXs to just two copies, staffers told reporters on June 3, 2019. The Air Force asked to buy eight of the planes for around $1 billion.

The subcommittee won’t approve further purchases until the Air Force submits an acquisition strategy outlining how it would buy and field all 144 F-15EXs it wants.

As lawmakers weigh the military’s request and work out conditions, Air Force magazine has published an infographic comparing the two fighters.

The new Eagles would replace 1980s-vintage F-15Cs in some or all of the nine squadrons that fly the older type, mostly for patrols over the United States.

The new F-15 itself is something of a mystery. “Details about exactly what version of the plane the Air Force would buy remain murky, pending negotiations with Boeing,” Air Force magazine explained. “House authorizers want a clearer picture before they commit to spending the full amount.”